We talk to Muller Van Severen about their love of humble materials, acts of serendipity and their new exhibition launching this week.

We talk to Muller Van Severen about their love of humble materials, acts of design serendipity and their new exhibition launching this week. 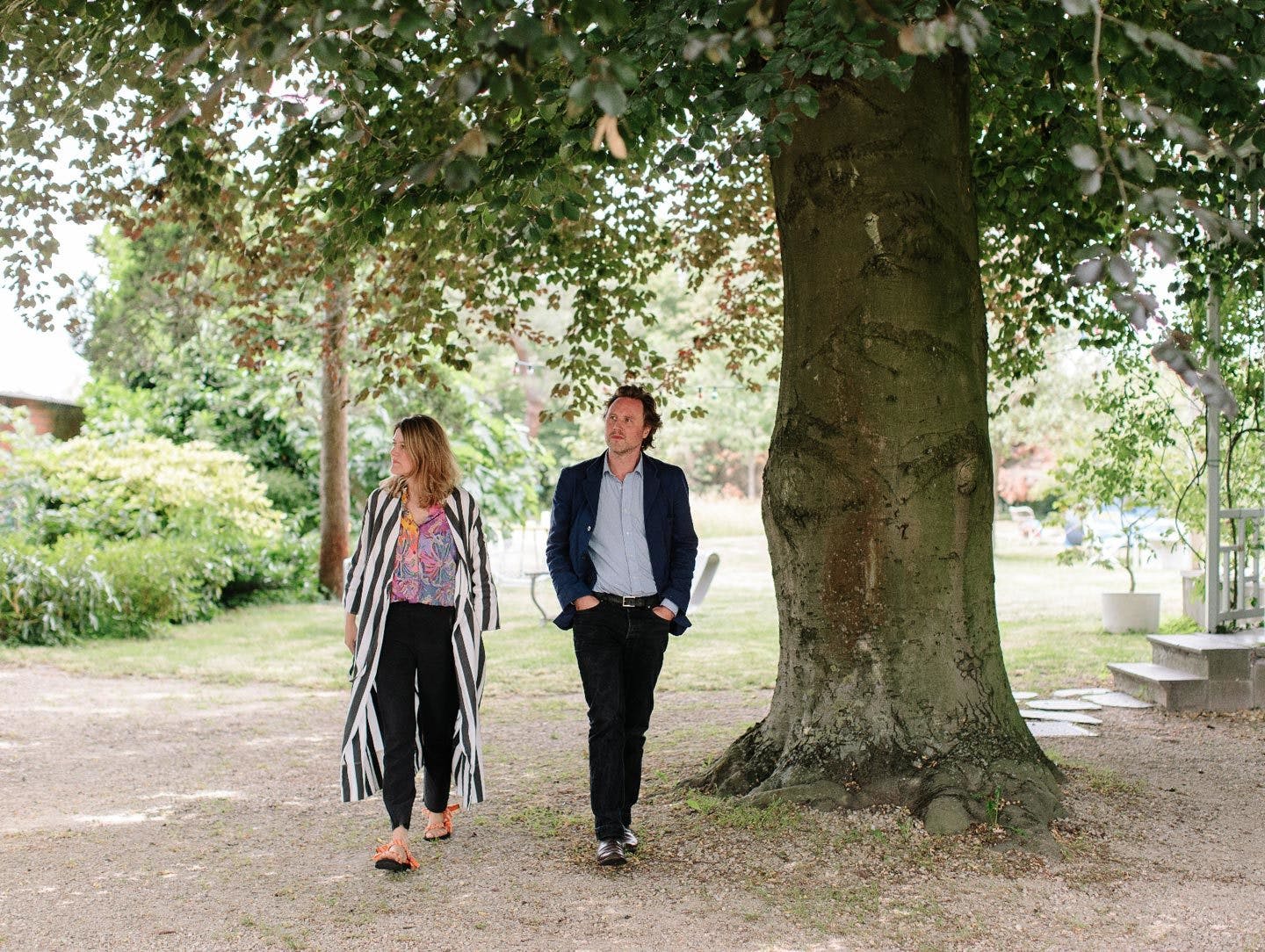 "An object is interesting if it has the same qualities as people I love - That its appearance feels natural and real, it is not trying to hide something, it doesn't pretend to be perfect. It has to shine from the inside." - Muller Van Severen, May 2020

We live in a moment of flux, the phrase 'the new normal' has become ubiquitous, and the need for a positive vision of the future is more pressing now than ever. We question what it means to live, to play, to work. In our creative community we also ask how design, and the objects we surround ourselves with, fit into all this.

For Fien Muller and Hannes Van Severen, these questions already instinctively form a part of their design process. Under the name Muller Van Severen they produce 'functional objects' that explore the essence of how we live and interact with the world around us. 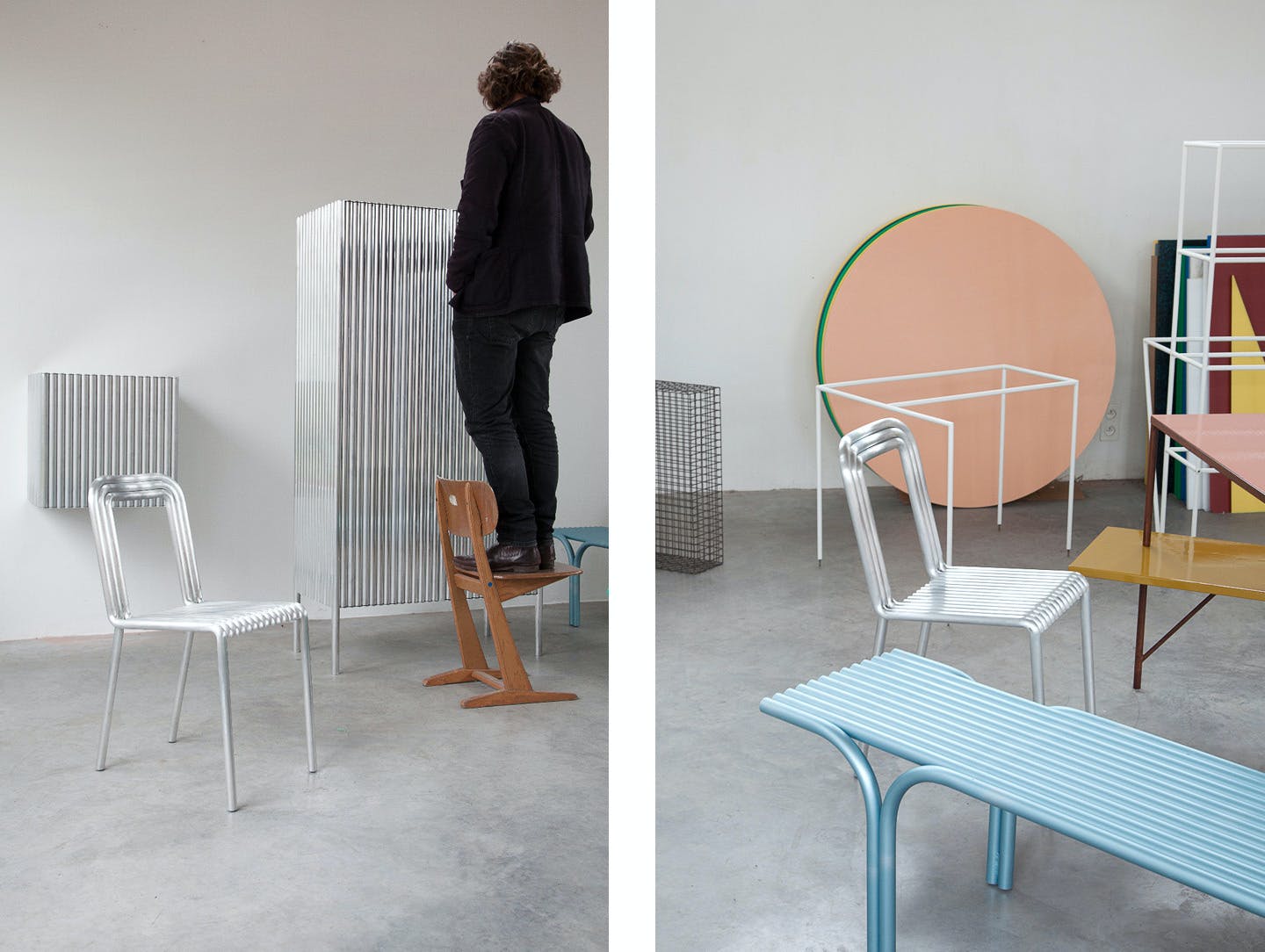 Inside the studio, their new Alltubes series intermingles with other items and materials from the collection.

Their furniture is an active participant in the room. It gives you pause and creates dialogue. As Hannes Van Severen says "We want to investigate how an object functions in a space. By working with transparencies and openings. We want an object to be in the right way, both absent and present." He continues "you [should] feel you can connect with it. And it can be a nice extension of yourself if you can keep looking at it, and asking questions about it. It's always giving you new insights."

For Van Severen, an object is often at its most interesting when "it has the same qualities as people I love; That its appearance feels natural and real, it is not trying to hide something, it doesn't pretend to be perfect. It has to shine from the inside."

From their Ghent studio, the couple has gently challenged norms with their designs for almost a decade. Their personal and professional life overlap by design. One informs the other. "The studio is the place to invent, experiment and make, to create." explains Van Severen "The house is to test what we made and to live with it. The place to test the experiments." 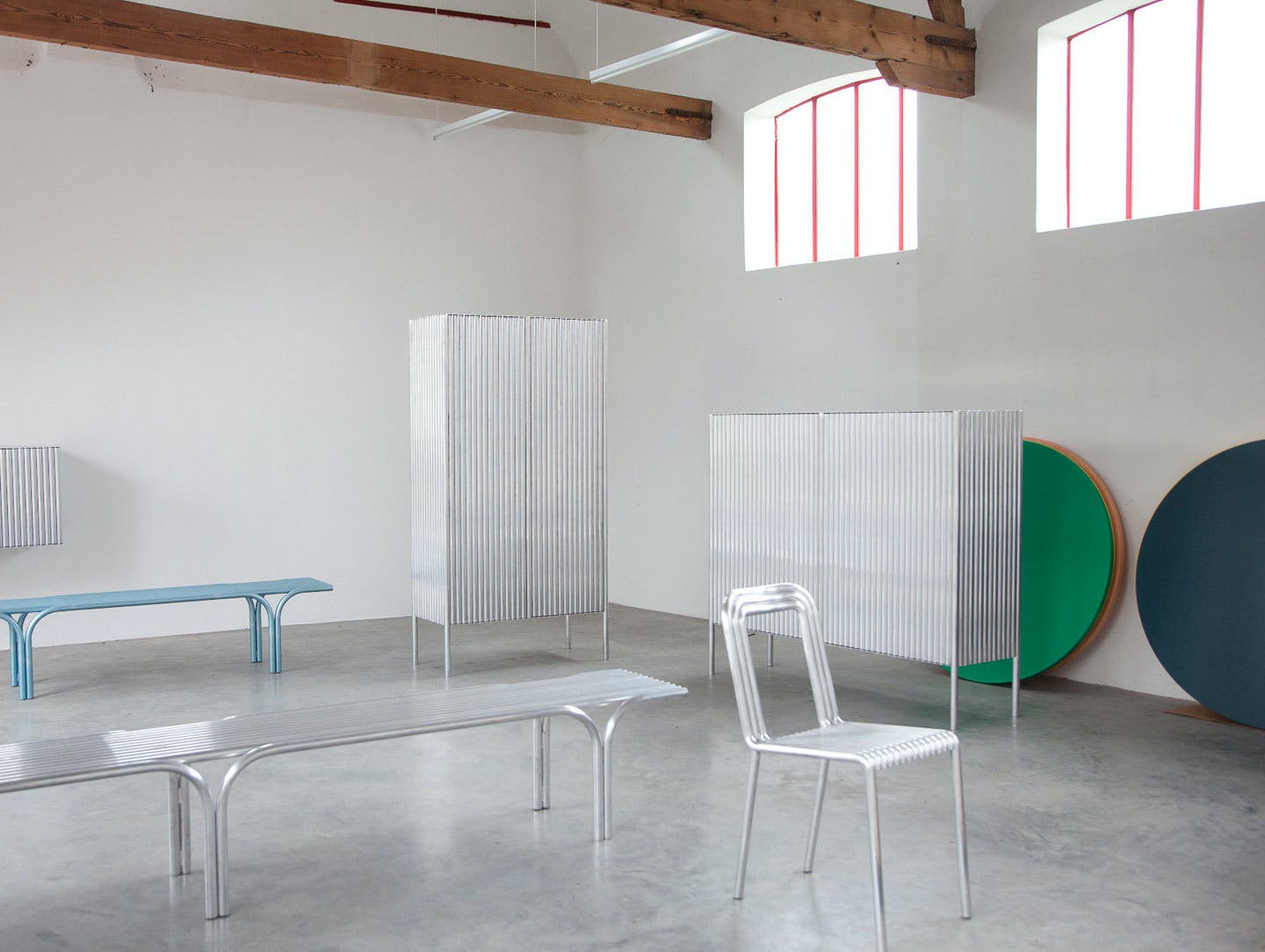 And while the global pandemic has seen many of us blur boundaries of home and work for the first time, for Muller Van Severen, in this respect at least, little has changed. "We have our home and studio here [next door to each other], so we are here most of the time anyway. Our assistants are working from home. It is different but also possible in this way. Everything is a bit slower" Van Severen says "It is a good time to concentrate on particular projects. In a way, a good time for reflection."

Their studio is a panoply of objects and ideas. Material compositions sit alongside fully formed designs and prototypes. The artists frequently work with humble, standardised materials. "It makes it easier to work on prototypes directly and create a satisfying result quickly." says Van Severen "It is like making collages with existing materials. It is a direct way of working, and therefore it feels free." 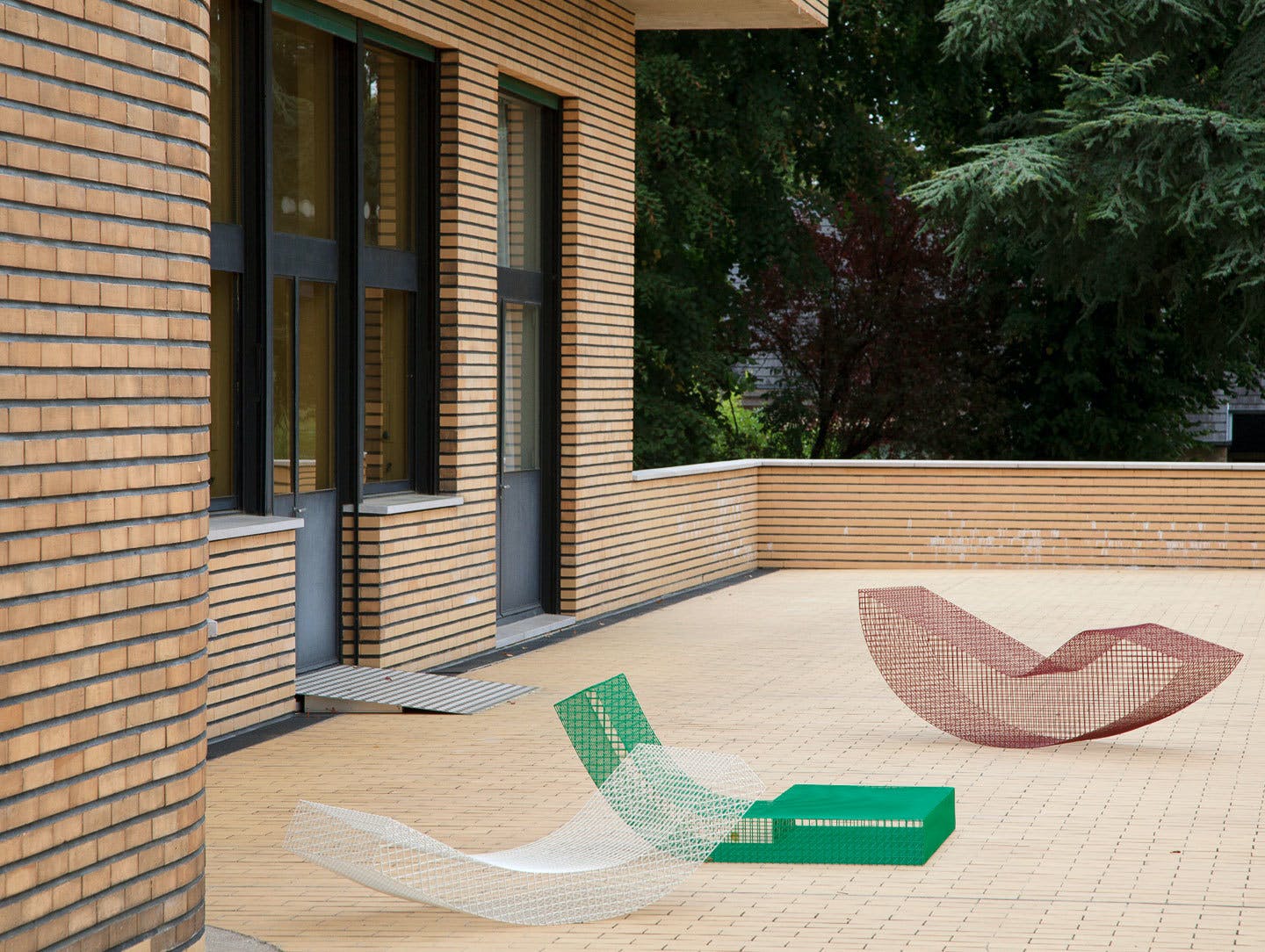 The Wire collection at Villa Cavrois

Their latest collection 'Alltubes' exemplifies this approach, using the repetition of one material, industrial aluminium tubes, to craft the series of furniture. "The pattern and repetition of the round forms make them appear less austere. This also produces the undulating effect and makes it possible for light to play on the surface," says Van Severen. "The combination of several of the same elements creates planes and gives the whole object a literal and figurative strength."

"There are no visible hinges, handles or door openings; they dissolve or vanish optically in the joints between the round tubes. This makes the cabinets more like volumes, some kind of mysterious pedestal, stripped of its front, back and sides." 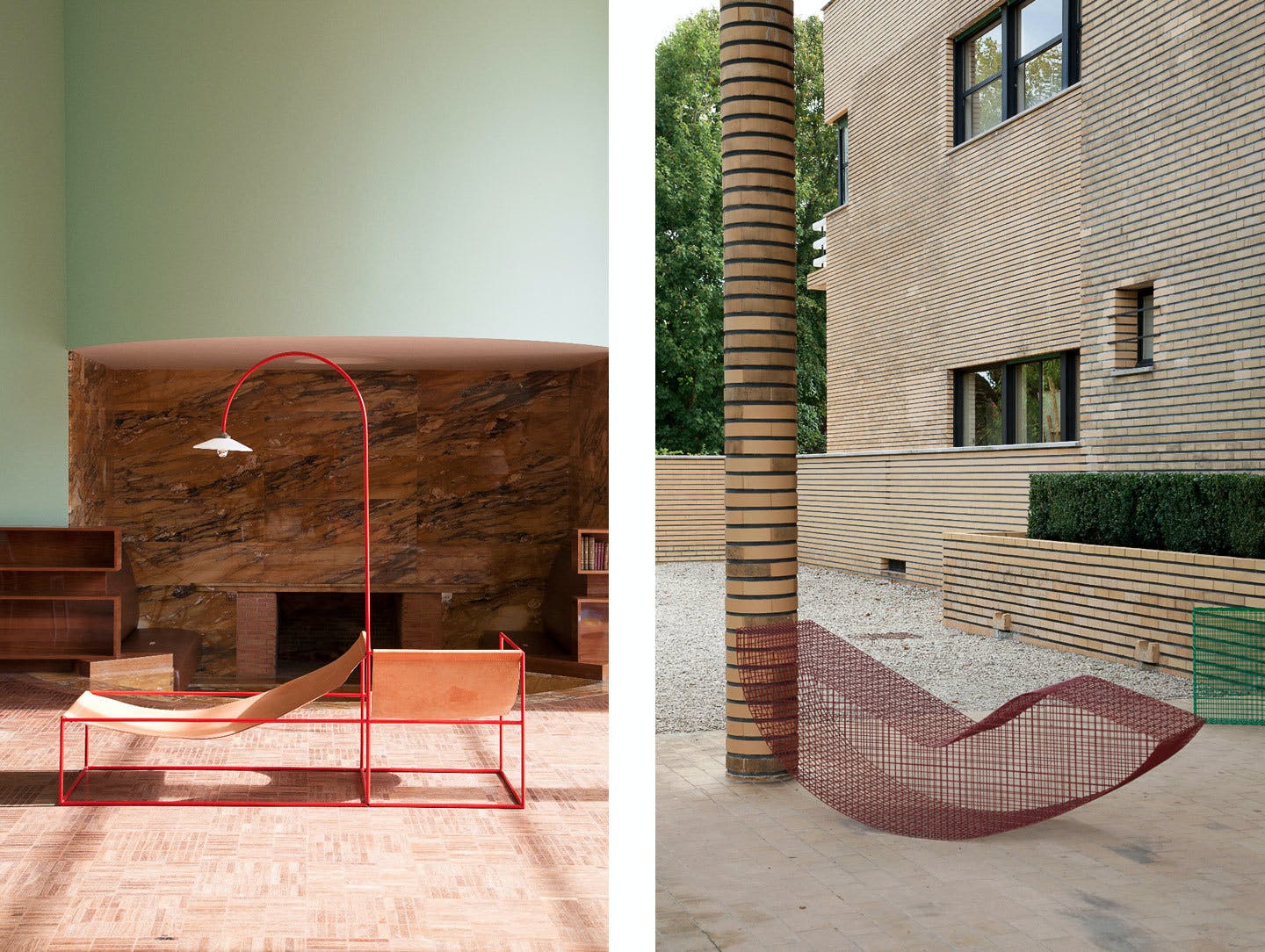 Duo Lamp and Seat and Wire series at Villa Cavrois.

An imposing geometric structure clad in saffron yellow brick, Villa Cavrois was a controversial addition to the sleepy Lille suburb of Croix. Commissioned in 1929 by French industrialist Paul Cavrois as the family residence, the architectural masterpiece is one of France's leading examples of Modernist architecture.

The artists felt a deep and instant affinity for Robert Mallet-Stevens, the avant-garde architect behind the Villa Cavrois project. "We were overwhelmed by beauty." says Van Severen "Smart details everywhere, we could directly feel a link in the 'love' of material. We think also that there is a similar idea in finding a way of working with colours and reflections." 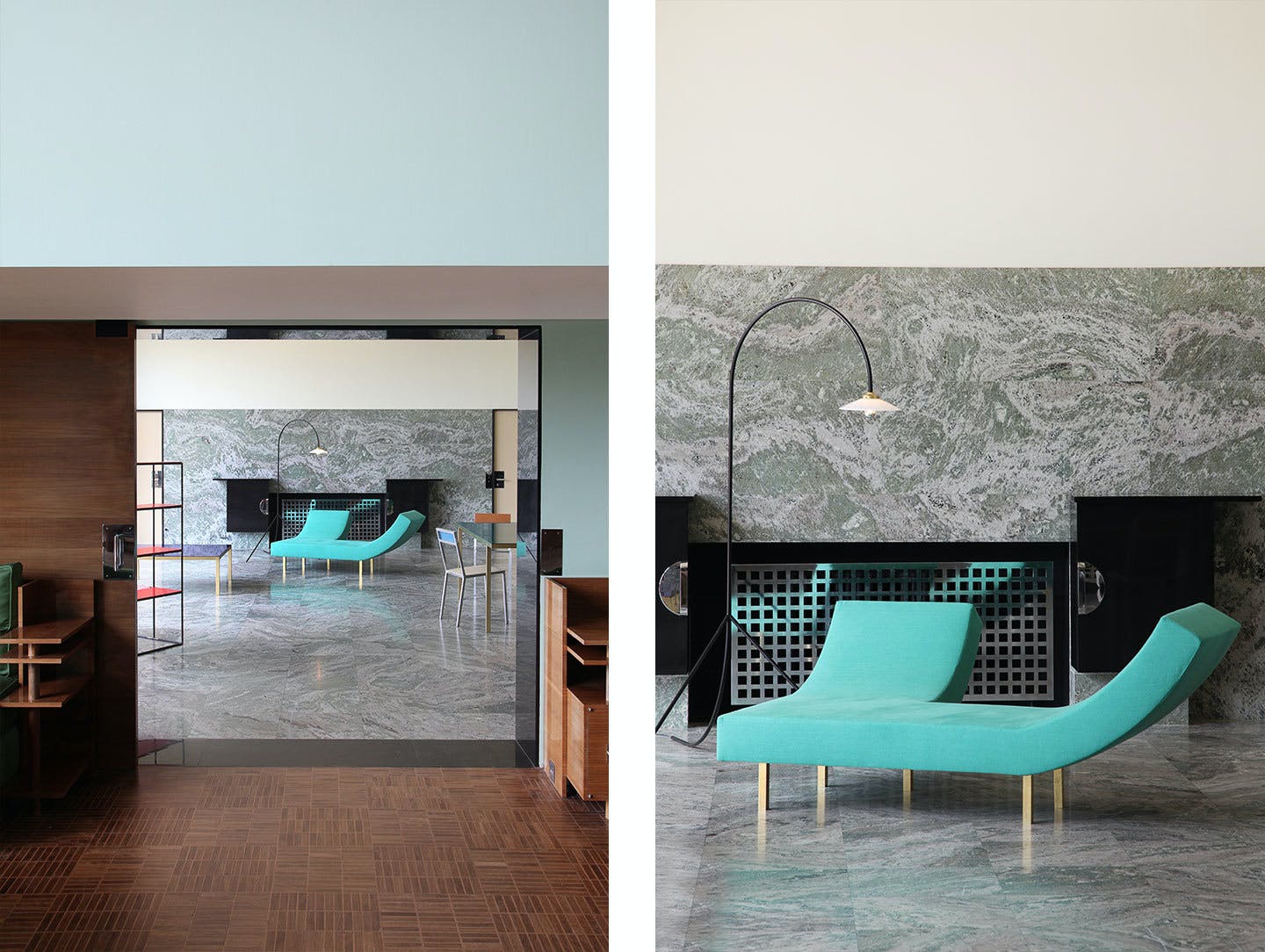 The new Sofa Cavrois in situ at the Villa.

A new design, the Sofa Cavrois was created especially for the show. Conceived via an act of serendipity, Van Severen recalls "when we tried one of our wire pieces on the terrace of the villa, we saw this seat appearing inside the dining room through the reflection in the window." He adds with a smile "it was meant to be!" "We came home, and we tried to visualise this feeling we had that day. It was remarkable to feel how smoothly this comparison went."

Their first-ever sofa design has a unique, sculptural form. Referencing the gentle curves of the wire series Sofa Cavrois appears almost two seats conjoined. Refined brass legs contrast with bold green linen. There are also echoes of one of their earliest works Installation S, in that both pieces inspire closeness and independence at the same time. 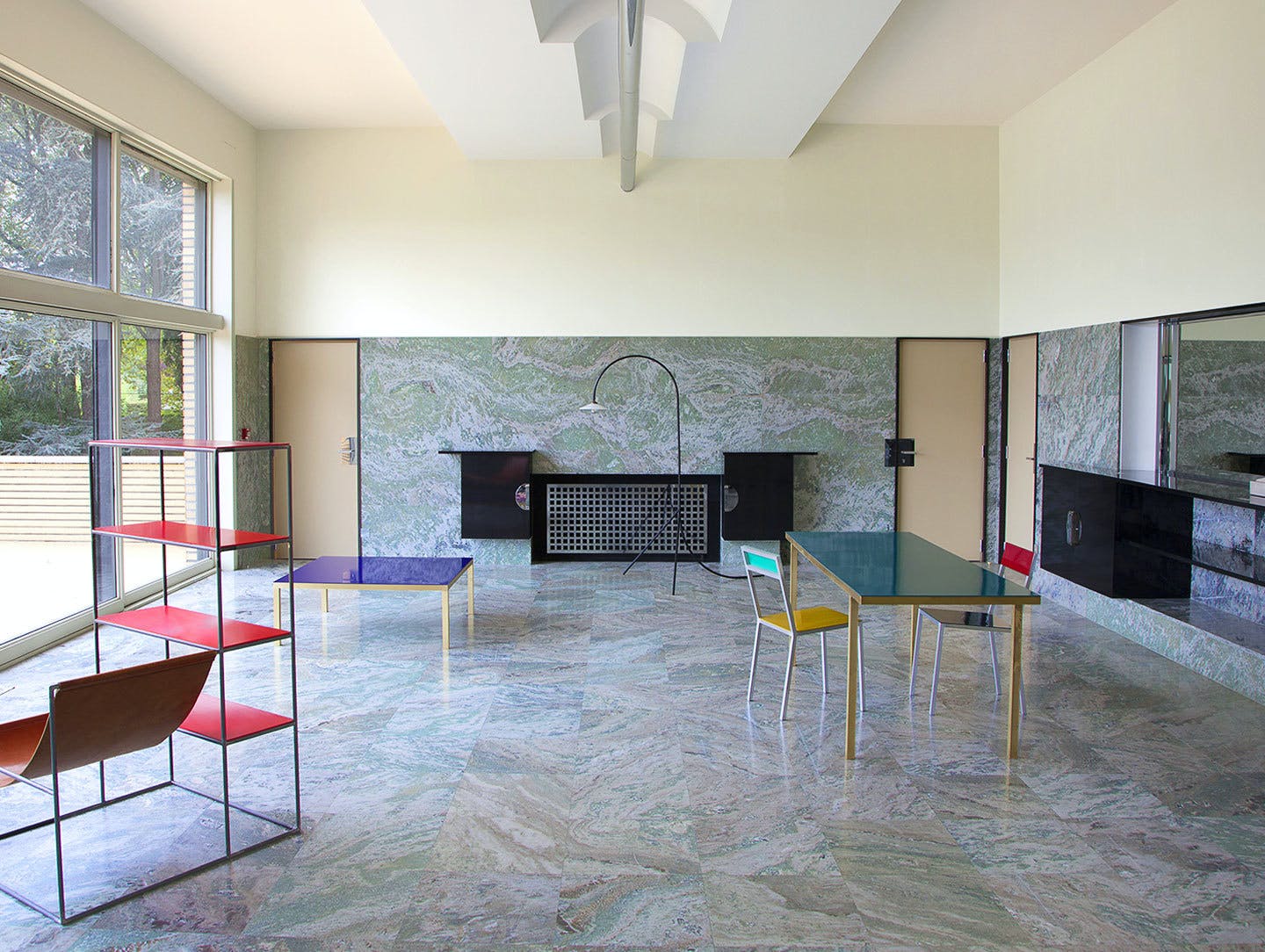 Elsewhere in the Villa designs from the collection join in dialogue with the rooms and each other. Colour is a crucial component "We think of colour as a material; it is there from the beginning" says Van Severen. Mallet-Stevens' interior plays both counterfoil and ally to their furniture, reflecting each other metaphorically and physically. Glossy, brightly coloured tabletops refract the graphic lines of the interior. The vibrant green of the Sofa Cavrois shimmers in the reflective polish of the Villa's marble floors.

In the presence of each other, Muller Van Severen's furniture and Mallet-Steven's interior lose sense of time. They are at once contemporary, and of the 1930s. And this is the very essence of timelessness for the artists. "When things from totally different times can be combined and still form a special bond with each other, without disturbing or hindering each other " Van Severen says "Or that an added value can arise when you bring them together." 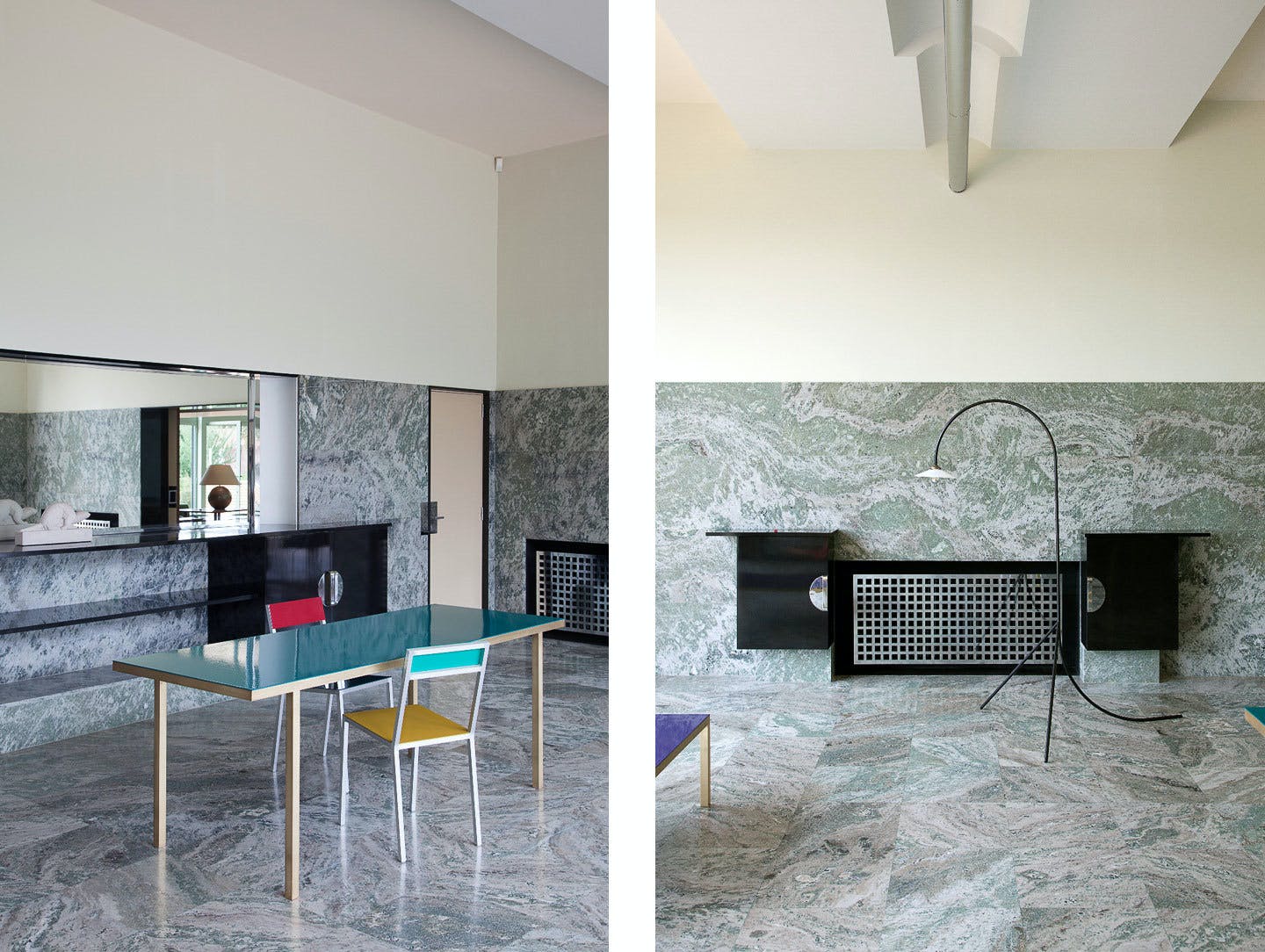 There is something joyous, optimistic even, in Muller Van Severen's furniture. Their sculptural forms appear effortless, almost improvised, though that certainly isn't the case. Each series has a distinct identity but is always identifiable as their work. "We are making families of objects with different characters but which have the same genes," says Van Severen.

The couple's designs are personal, but the results have universal resonance. They remind us that we can tackle big questions in small ways, and respond with grace and humour. At the heart of everything is their curious, playful spirit which transfers itself almost alchemically into every object.

"Seeing an object emerge that was previously an idea in your head. Longing for its birth and then seeing it exactly as you imagined it. Or even better." Van Severen concludes "In this process, you build a bond with that object. It gains a soul."

Mentioned in this article:

We visit Studiomama's Nina Tolstrup and Jack Mama at their home in East Lon... Read more