Our round up of the launches from this year's Stockholm Design Week.

Sweden's capital city is one of the rallying points for Scandinavian new modernism - we assess the impact Stockholm Design Week now has upon the global stage.

The past few years have seen a renaissance in Scandinavian design, classics by designers such as Hans Wegner and Arne Jacobsen have found new audiences, and not content with riding on the coat tails of their predecessors emerging brands and designers have begun to create a new identity for the Scandinavian aesthetic.

What tends to distinguish Hay, Menu and others from their non-Nordic counterparts is a completely holistic approach to the process of designing, making and selling furniture. Design studios in Scandinavia have lead the way in an adaptable and multi-disciplinary approach. Collectives such as All The Way To Paris, Norm and Note Design Studio are just as likely to be found creating brand identities and graphics as they are products. The design brands themselves have also embraced this; Norm are at the creative helm of a resurgent Menu, All The Way To Paris design not just rugs for &Tradition but also the website and catalogues. Meanwhile at Fogia, Note have created several pieces of furniture but are also creative directors. Whilst this approach is not exclusively the preserve of the Scandinavians, Maruni have Naoto Fukasawa at the creative helm and Driade have recently appointed David Chipperfield to do the same; It is perhaps the success of these Nordic brands that has been catalyst for wider change.

It's undeniably an approach that works, as Jasper Morrison recently told Dezeen in a discussion about the importance of photography and branding: "Most customers discover the furniture through magazines and websites like [Dezeen]... So it is really critical. I don't think many companies get that. You see the terrible shots they do." Morrison himself has designed a capsule collection, as well as contributing to the creative direction to showcase his products for Danish brand Fredericia.

So where does this put Stockholm Design Week on the international stage? The bigger launches and international brand presence remain the preserve of Milan's Salone Del Mobile. But Stockholm, much as London, is increasingly internationally attended. Their strength at creating a united identifiable aesthetic across brands and design practices makes it a place to forage for ideas on perhaps on marketing a design culture rather than product itself. That said, there were several new pieces and updates worth mentioning that we have collated for you below. 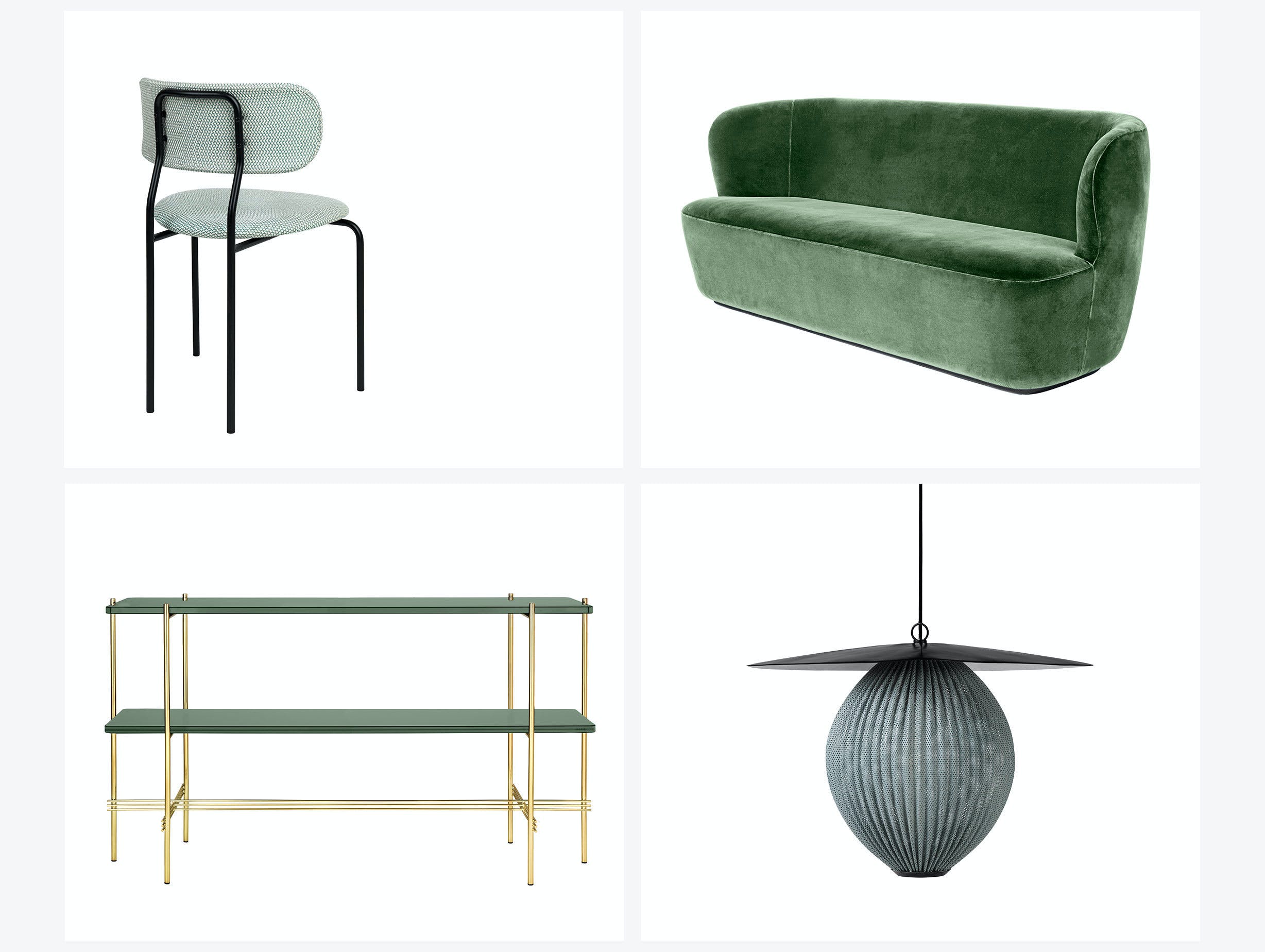 Gubi have become somewhat of a microcosm of the Scandinavian design scene in general. Their collection borrows heavily from the past, championing the oeuvre of designers such as Grossman and Matégot. But the company is not all about nostalgia, the roster of classics is tempered by carefully selected contemporary pieces by the likes of GamFratesi. Over the past year Gubi very much found it's distinct identity. These new pieces and extensions continue this approach of blending modernism both new and old. Their presentation focusing on luxe textures and bold colour ways to bring the often quite disparate pieces in their collection into a coherent whole. A particular favourite for us is the re-edition of Matégot's Satellite Pendant, their chalky bright rigitulle globes make them reminiscent of festive lanterns but the perforated metal gives industrial edge. 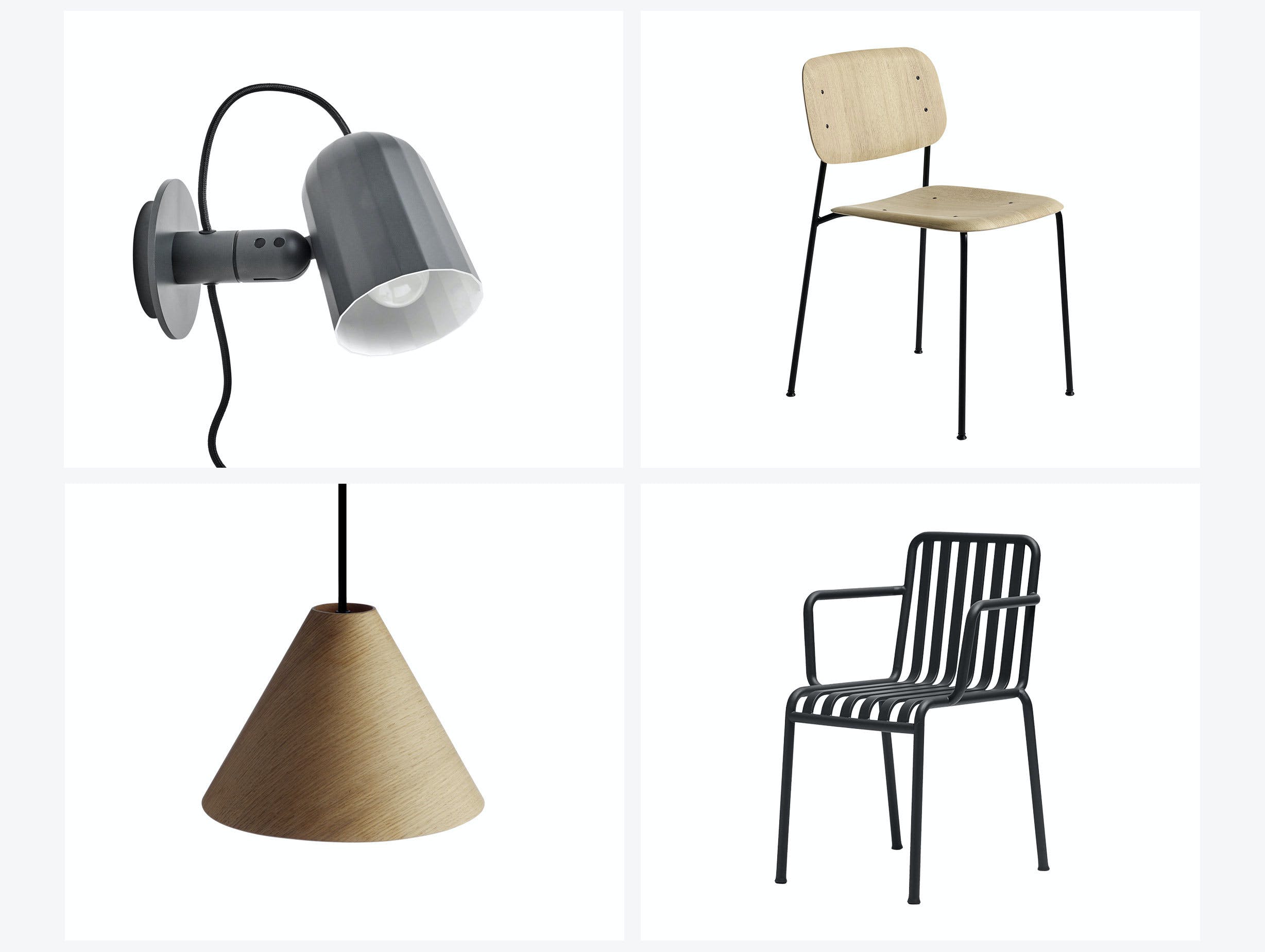 Hay extended the Noc collection to include this wall mounted version. We were also keen on the Soft Edge Chair by Iskos-Berlin that employs the latest techniques in wood moulding, creating 3D forms that would otherwise be impossible. It also comes on a fully wooden base and in black lacquer finish. Another exploration in wood is Johan Van Engel's 30 Degree Pendant which is cut along 30 degrees to create a continous line of wood grain. Their stand was a reminder for us too of the Palissade outdoor collection by the Bouroullec's that is now in production. 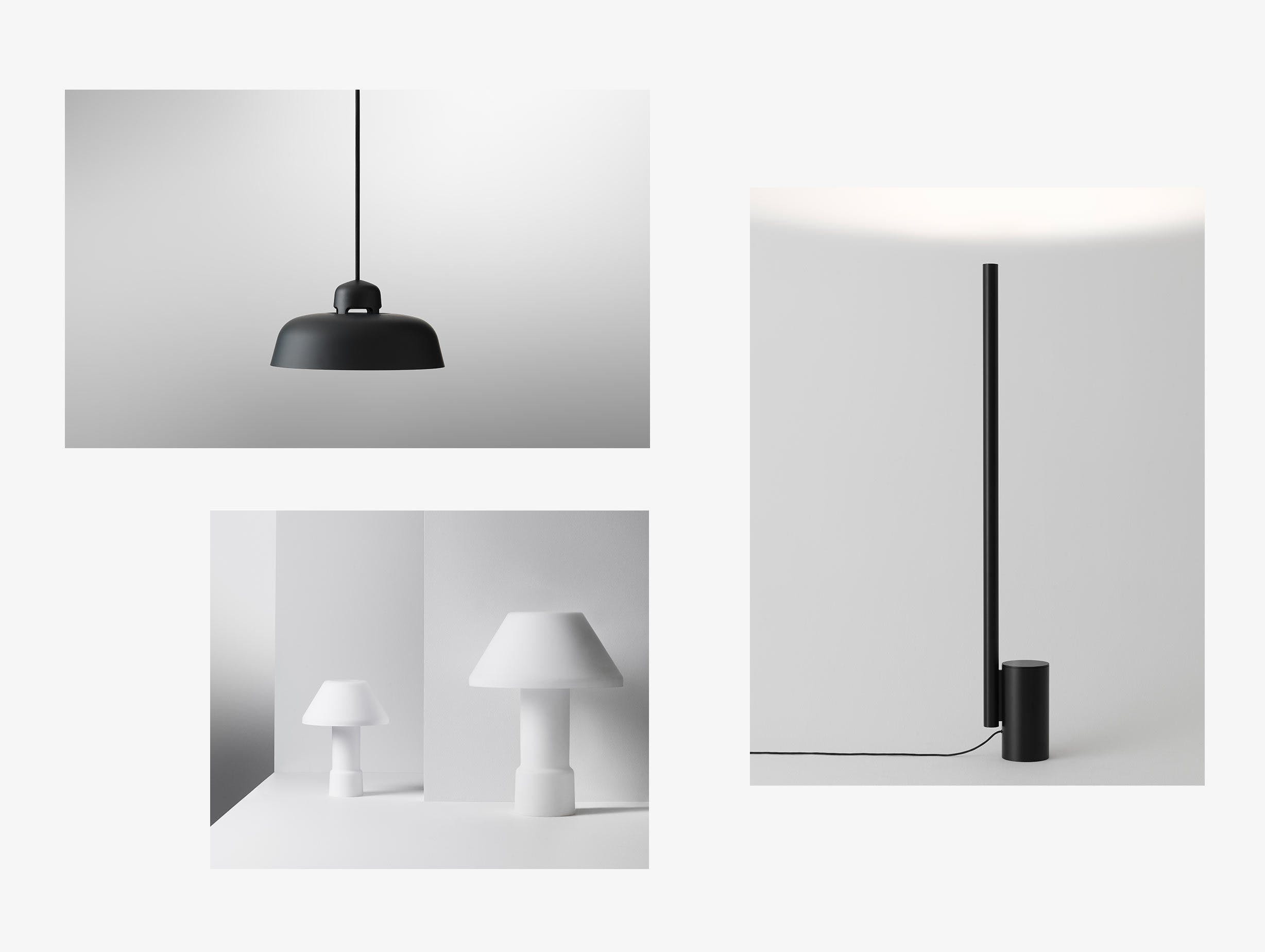 Where Wästberg excel is the forging of long lasting creative relationships with their designers; these new products are all by designers they have worked with previously and it is interesting to see the progressions as their collections develop. Lampyre by Inga Sempé uses opaline glass to create a controllable warm light much like it's namesake the glow worm. This material, more commonly seen in lighting of the deco or mid-century era, is brought up to date with a distinctly contemporary silhouette. Winkel's Alto light speaks the language of minimalist designers such as Maarten Van Severen and borrows it's form from the lines of Brutalist architecture. Industrial Facility's contribution is the Dalston pendant; a take on classic industrial lighting archetypes. 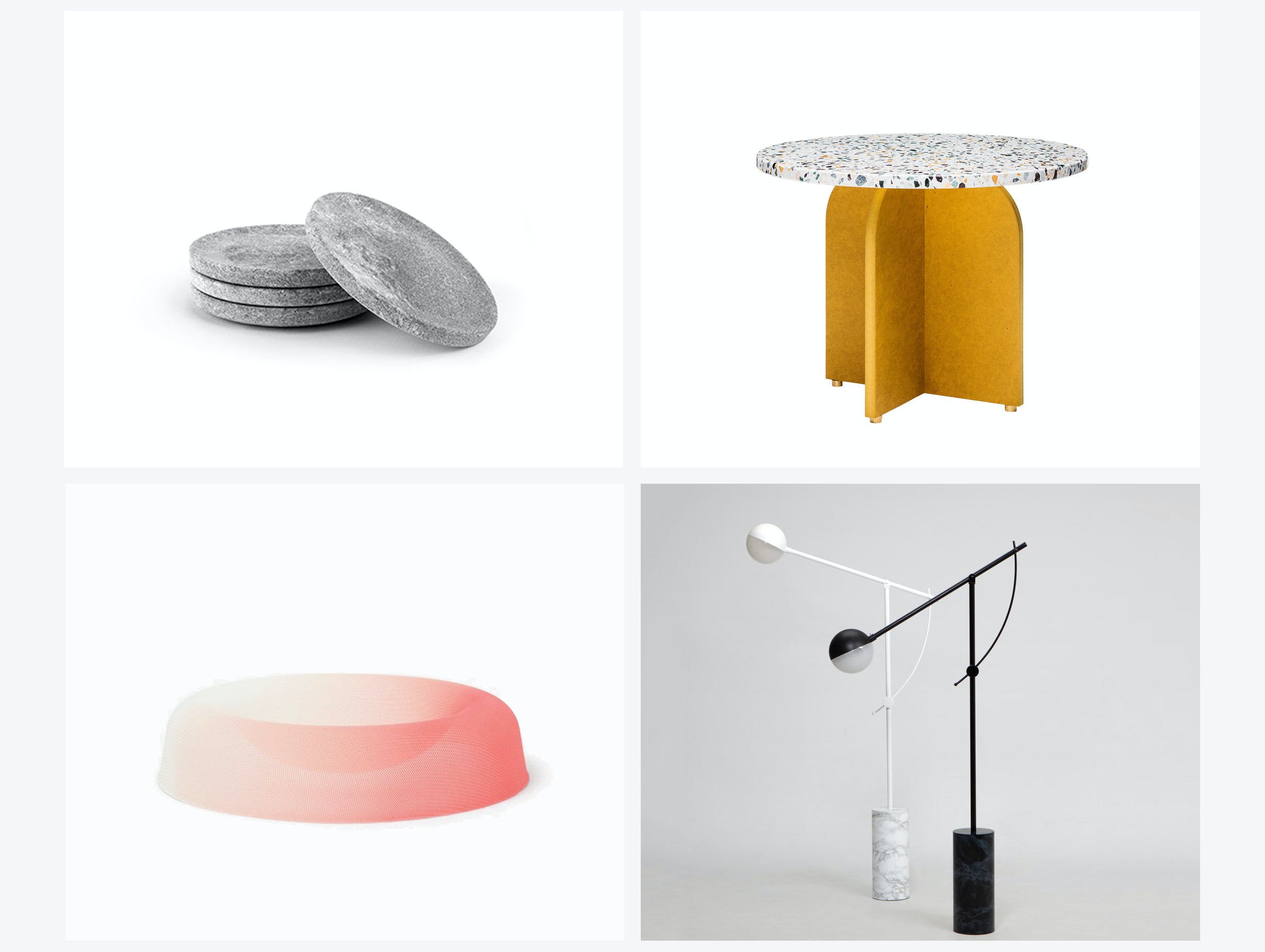 The resurgent use of Terrazzo; Max Lamb and Muller Van Severen may have started it, but now the material has found it's way into the mainstream. Much as copper was everywhere two years ago, this material can be seen across several product areas. This example by Fish & Pink is a particularly nice one. Their Freckles and Shine table hits the right note for us, a hint of post modern luridity balanced by a modern form. We were also intrigued by Smaller Objects, the new venture by Claesson Koivisto Rune, which attempts to bridge the gap between designer and consumer - with a new retail model that awards 75% of the design royalties to it's designer (the industry average is currently 5%). It's early days product wise but we feel the approach is a worthy one. 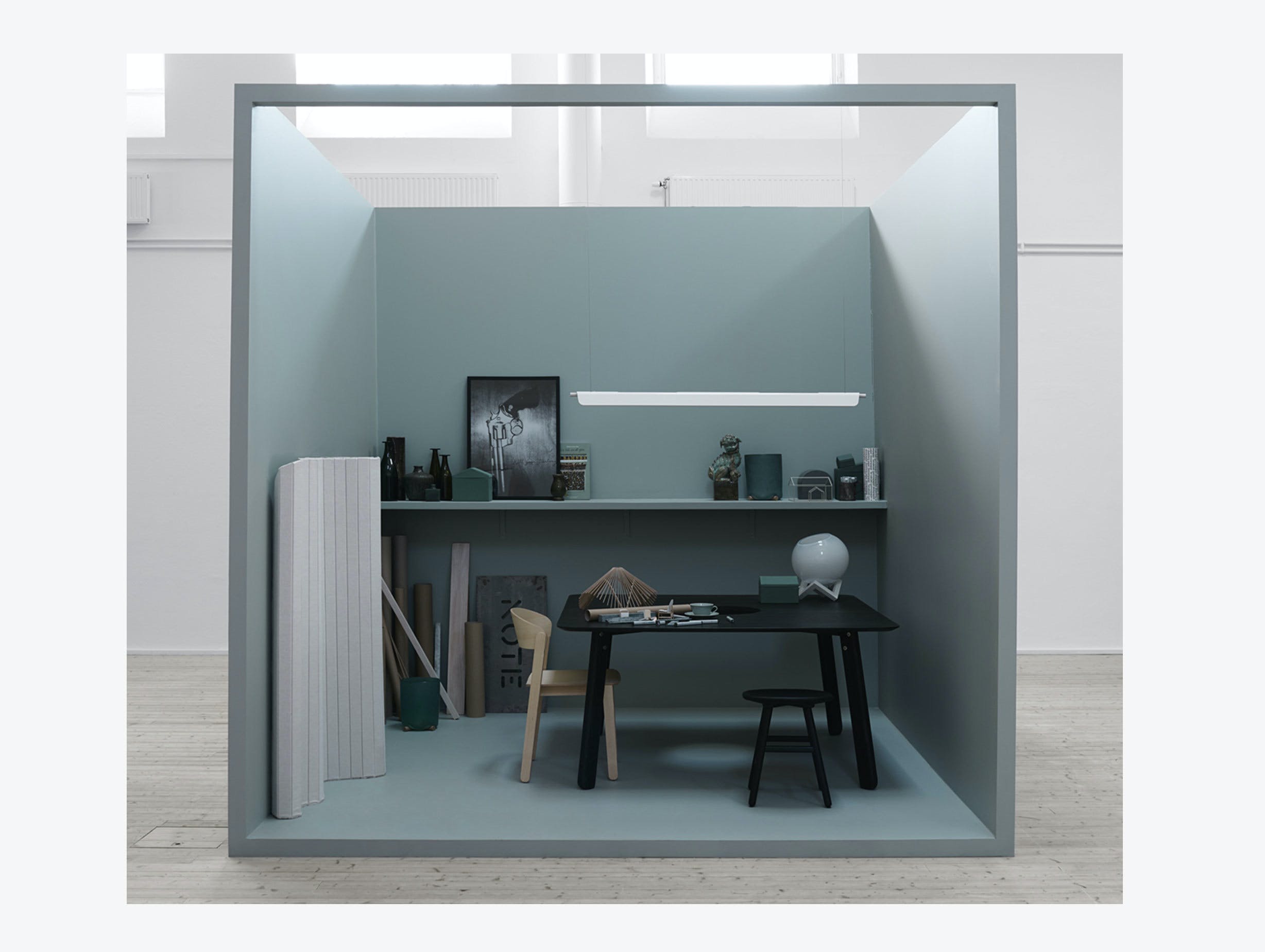 Note had their own solo show as part of the celebrations for their announcement as Designers of the Year by Residence Magazine. Styled by Lotta Agaton the exhibition consisted of curated roomsets and highlighted the growing importance of images in communicating design to consumers - a theme reiterated across the fair as a whole.

Behind the curatorial process: part 4

The last in our series sharing the stories and inspiration behind our favou... Read more

Behind the curatorial process: part 3

The third in our series sharing the stories and inspiration behind our favo... Read more

Behind the curatorial process: part 2

The next in our series showing the stories and inspiration behind our favou... Read more

Behind the curatorial process: part 1

The edit: outdoor and accessories at Milan Design Week 2019

For the Milan Furniture Fair HAY took over the Palazzo Clerici, here is our... Read more

The 2017 Milan Furniture Fair has now drawn to a close and left us all in a... Read more

As ever Milan's Furniture Fair was an immense event, that now goes far beyo... Read more

Our review of 2014's Milan Furniture Fair is here. We trawled the fiera hal... Read more

Welcome to our 2013 review of the Milan Furniture Fair. A real labour of lo... Read more