London Stadium played a pivotal role during the 2012 London Olympics. As part of the legacy project for the Olympic Village it was vital for the local area that the stadium find a new use and become a continued contributor to the local community.

20.20 were charged with the task of redeveloping the stadium for a diverse range of new stakeholders; West Ham United Football Club, Newham Borough Council and UK Athletics. The challenge was to create 9 new hospitality spaces that would meet the needs of all parties, whilst retain a distinct, unique character for the space.

For West Ham FC, the design team devised a concept that would evoke the club's heritage and East London roots. The team colours of claret and blue were employed across the upholstery, whilst brushed copper finishes referenced the shipbuilding past of the club's founder Arnold Hills.

Slogans and imagery immediately recognisable to a West Ham fan were used across the complex to create narrative and a sense of discovering something new on each visit.

Viaduct helped 20.20 by sourcing, delivering and installing the furniture for the West Ham hospitality areas.

20.20 are a strategic design consultancy who believe "change happens when an insightful strategy is brought to life through beautiful, intelligent, powerful designs." Previous and current clients include Arsenal Football Club, Everyman Cinema Group, Good and Proper Teas and B&Q. 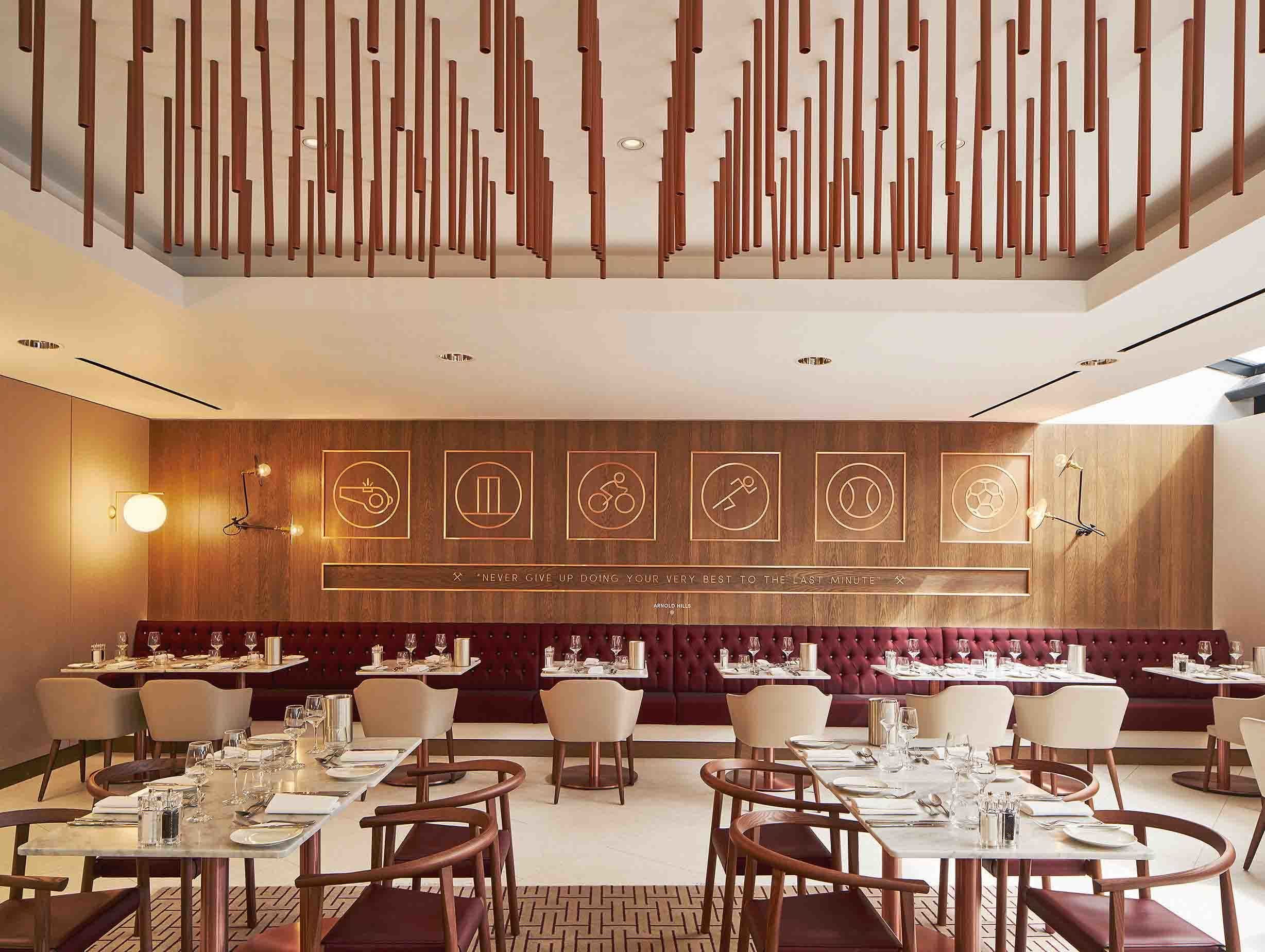 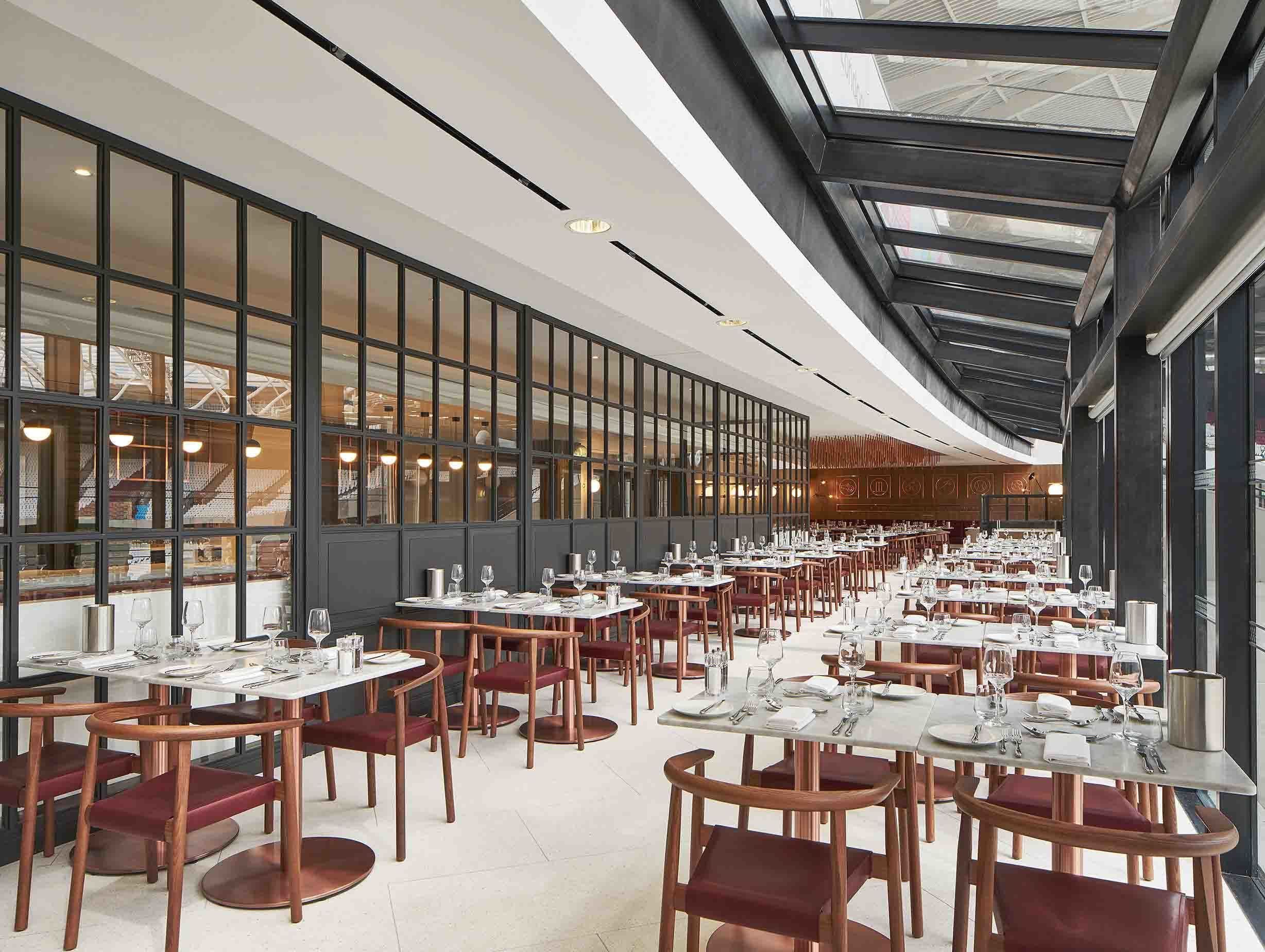 The claret from the team's colours is combined with dark wood chairs and panelling to create a luxurious 'clubhouse' feel. 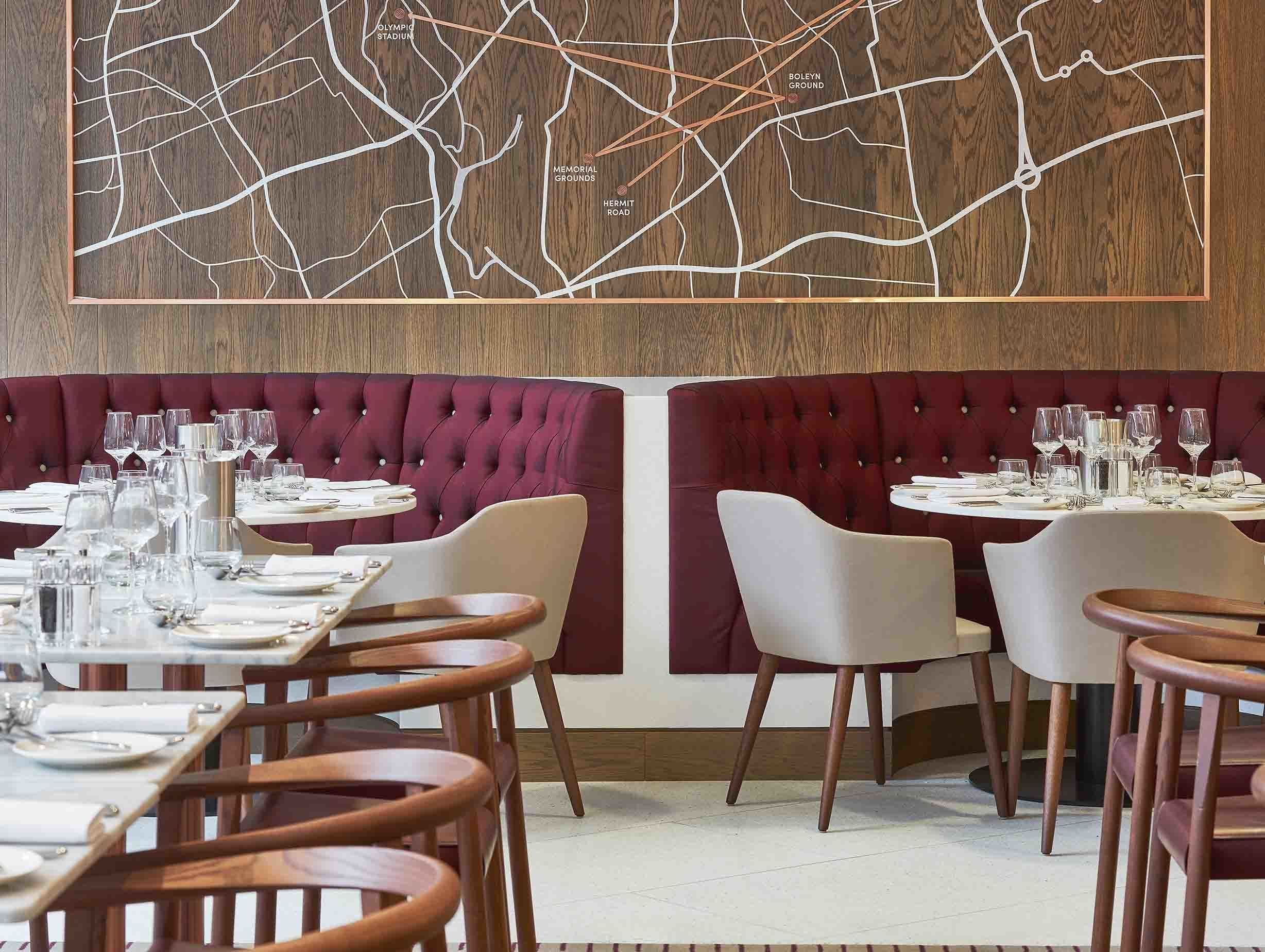 A map of London's East End showing the path from West Ham's original stadium to it's new home adorns the walls. 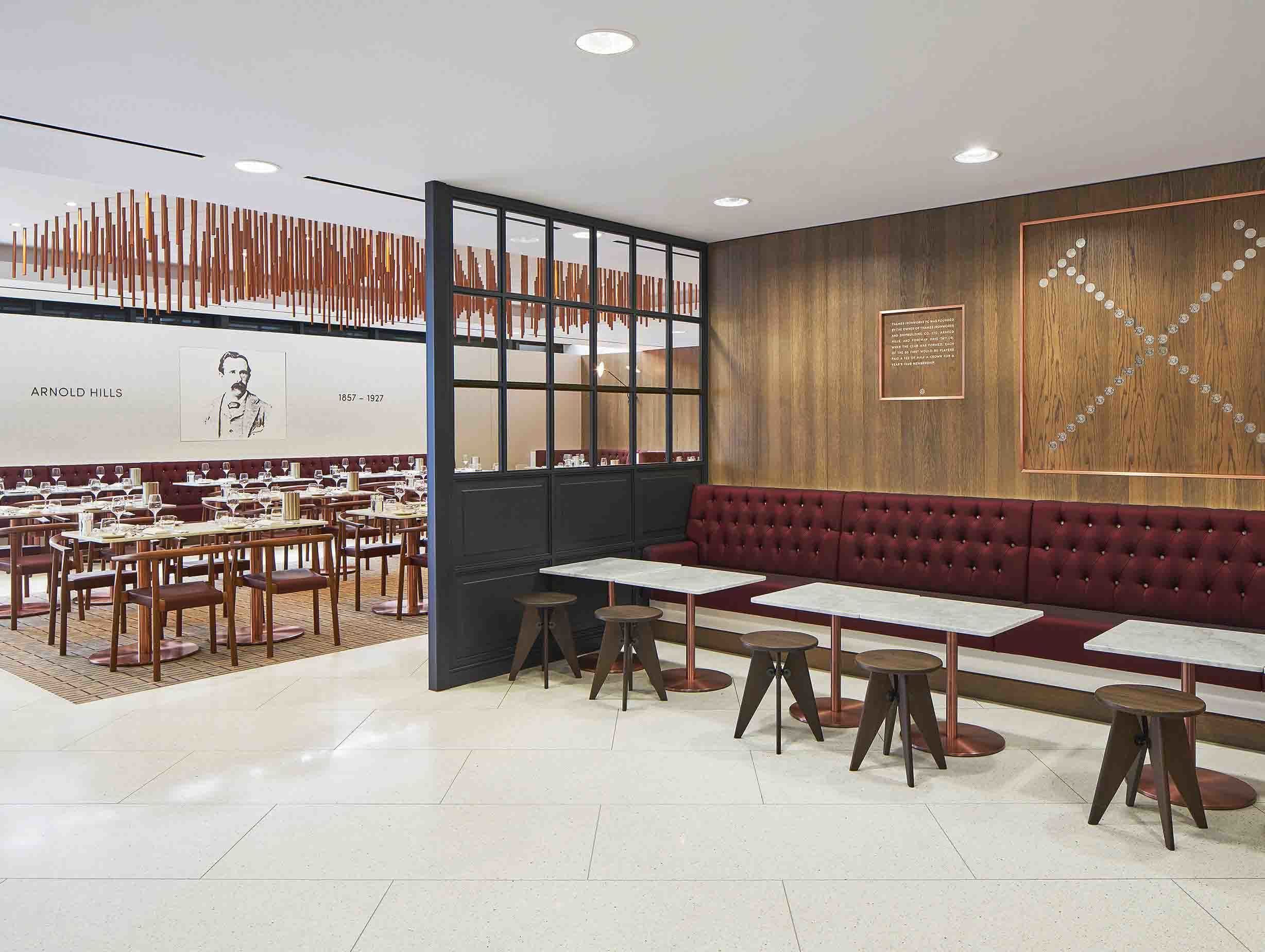 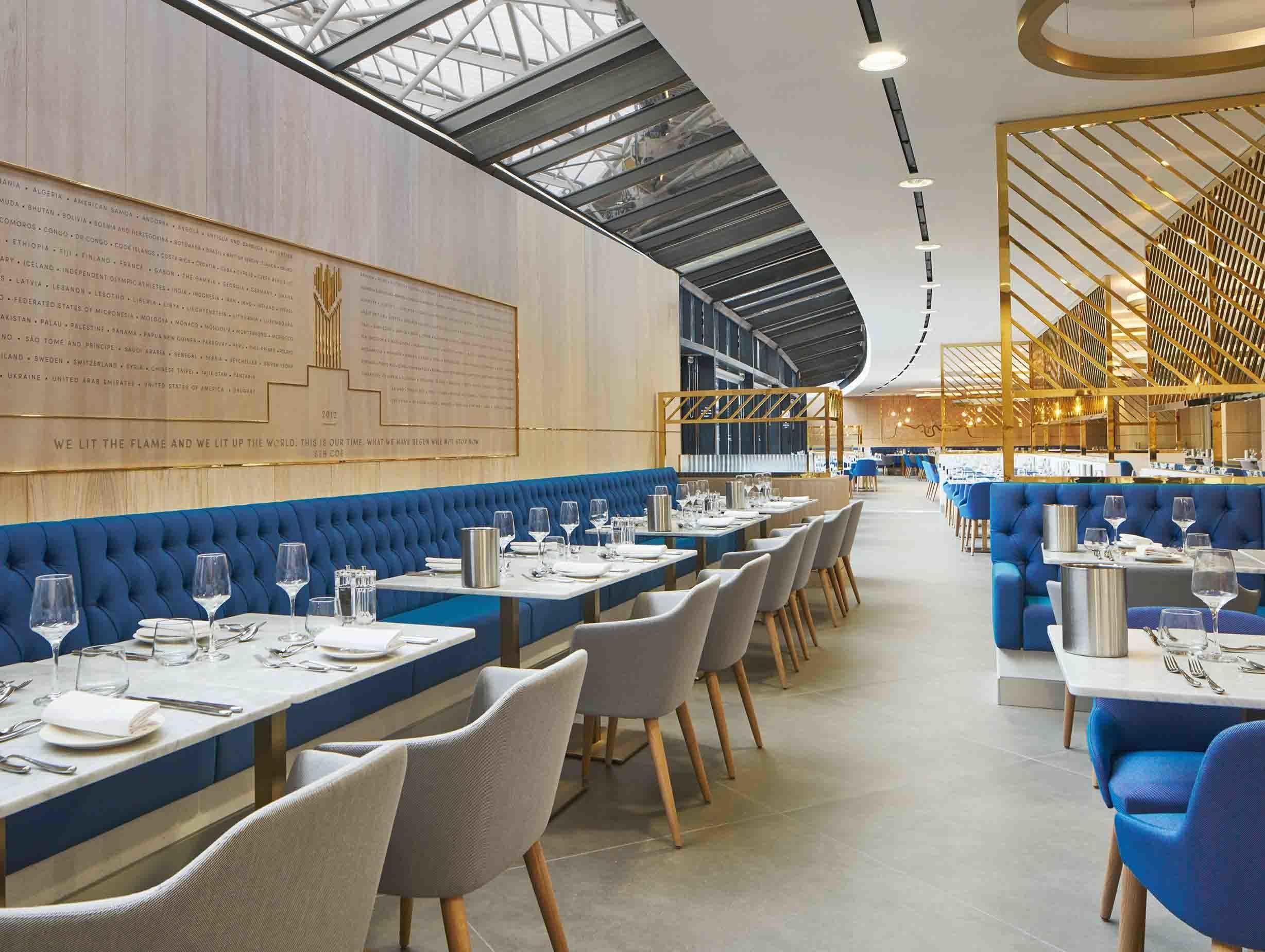 The team's characteristic blue is also employed in the design, combined with cool toned greys to create a sense of lightness emphasised by the natural light that floods in from the stadium roof. 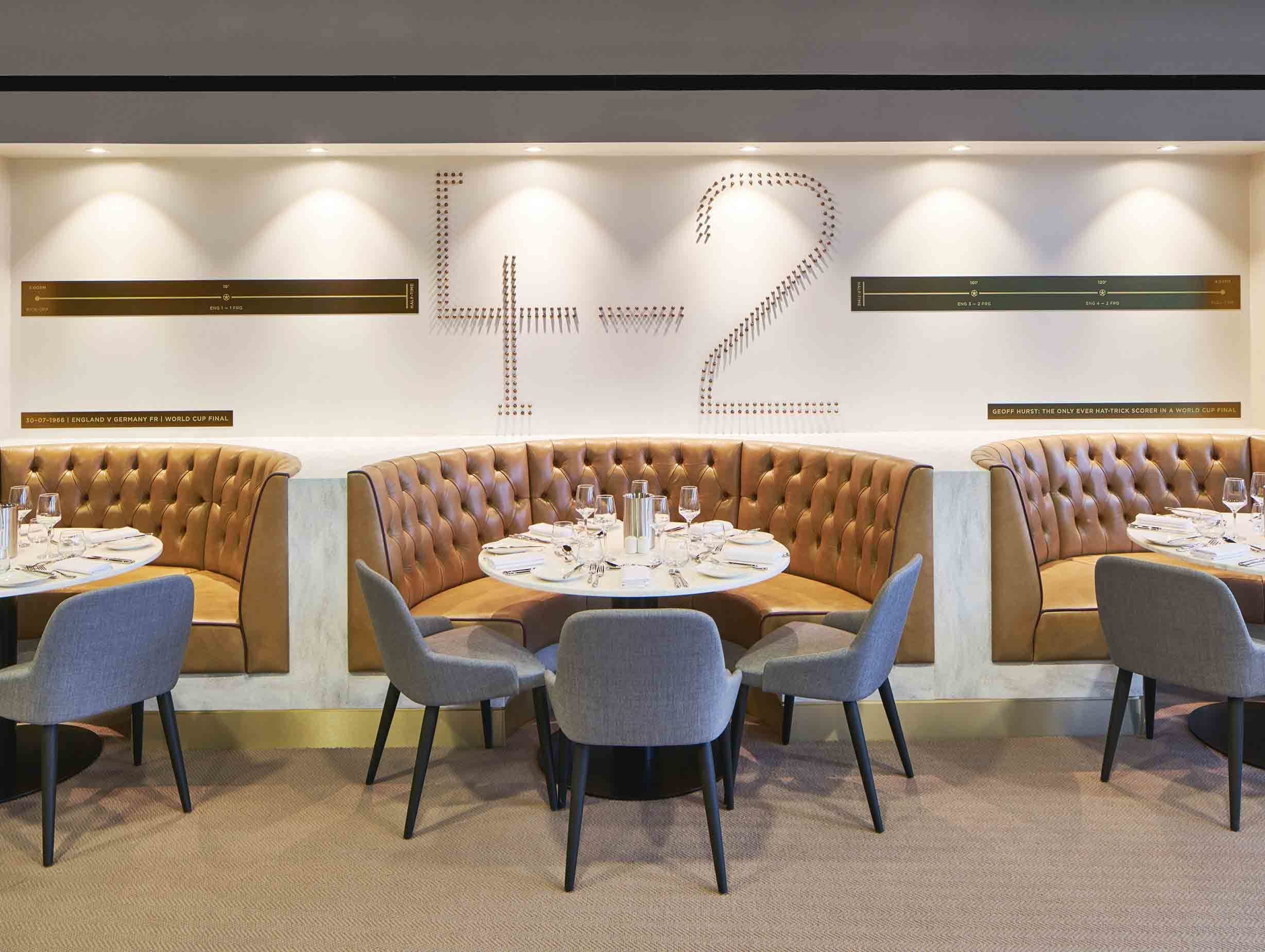 A rich materials palette of marble, leather and densely woven fabrics was employed to create a luxurious feel to the hospitality areas. 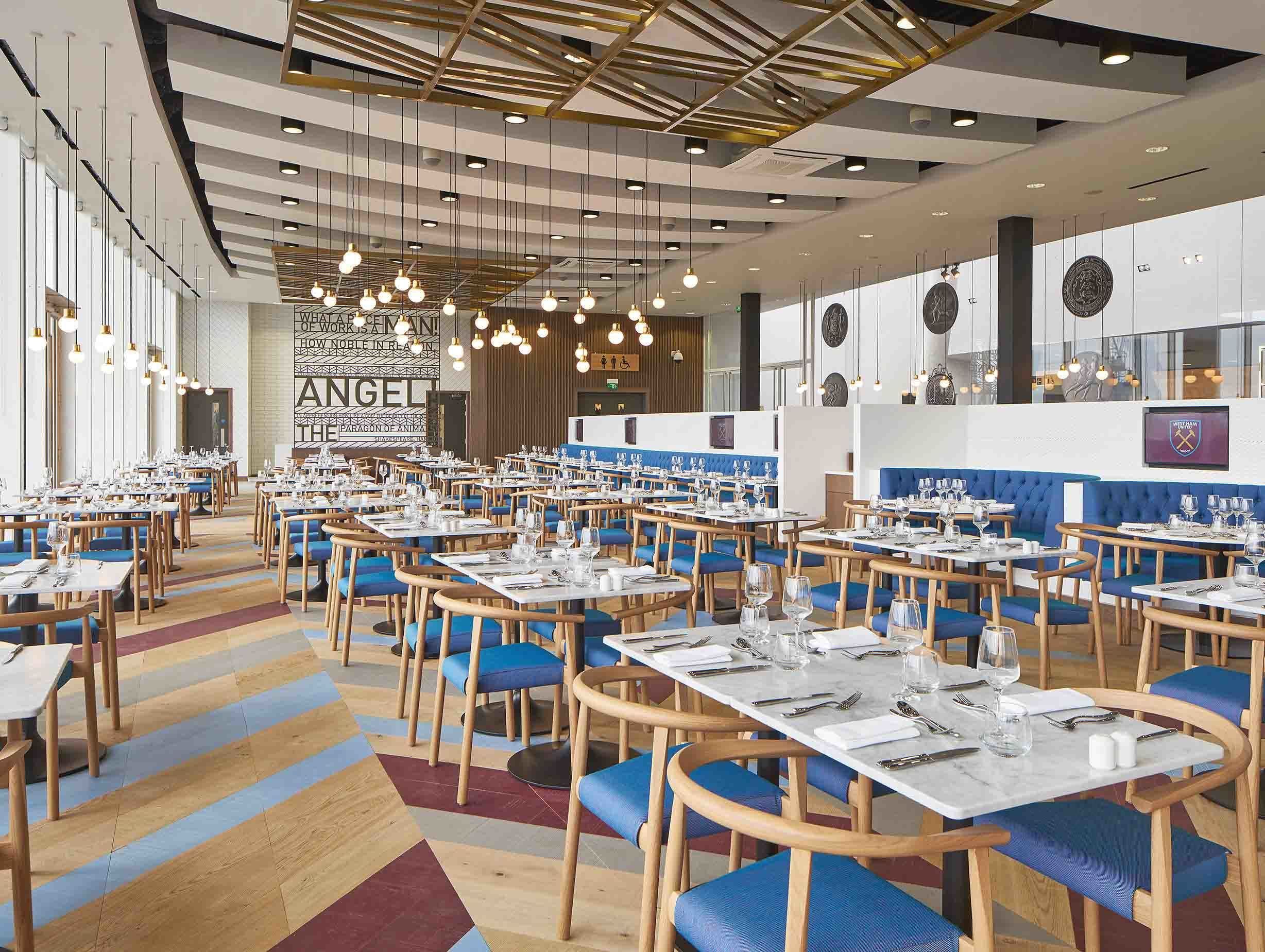 From the floor and walls to the smallest details, the story of West Ham is layered throughout the space. 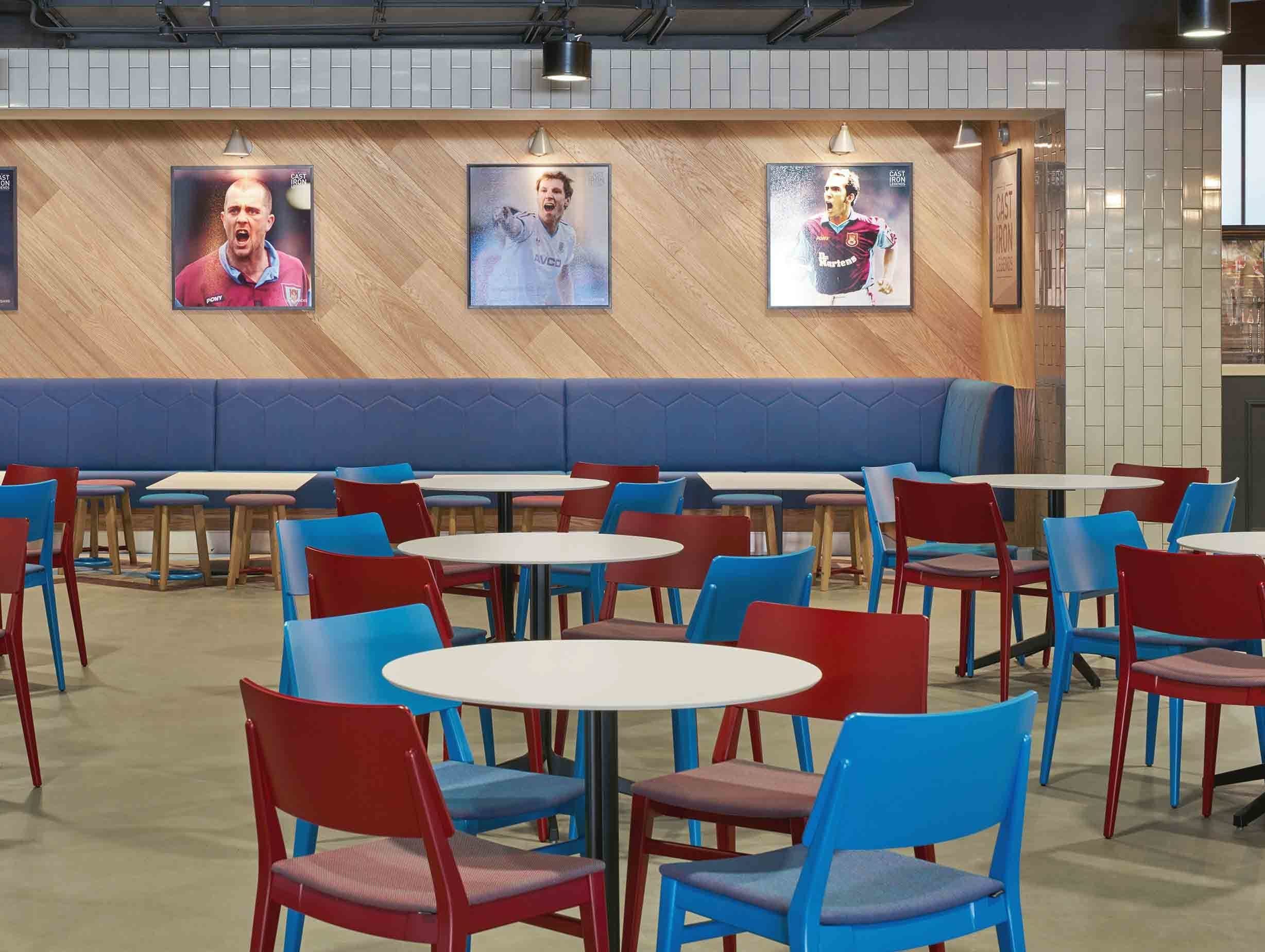 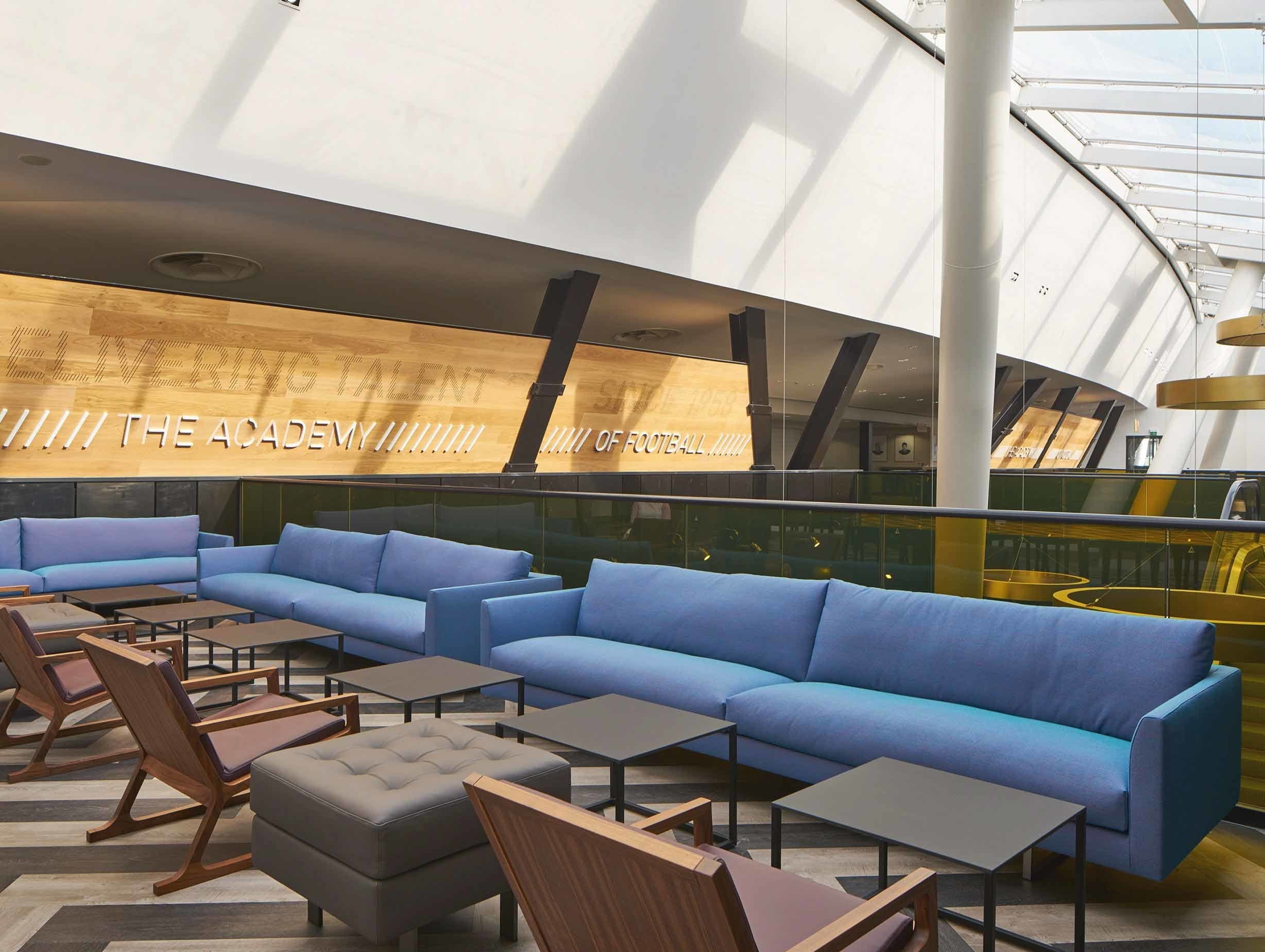 Communal lounge areas are situated throughout the space, Sofas and lounge chairs combine with the natural light and high ceilings to create a sense of comfort and lightness. 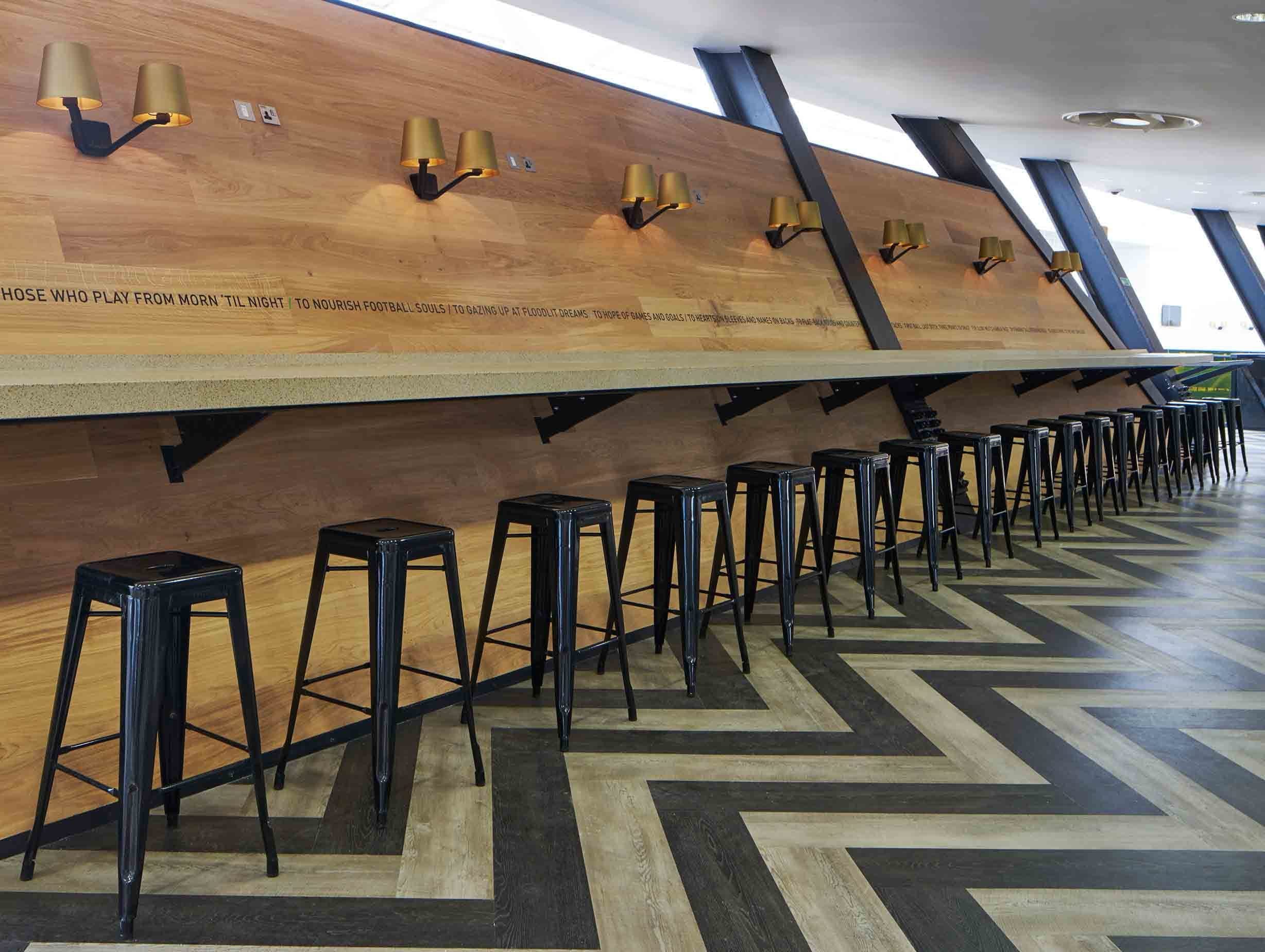 The industrial feel of the space was emphasised by the design team, the choice of stool for example echoing the steel girders that form part of the stadium structure.

A dynamic refurbishment of an existing office building in heart of the City... Read more