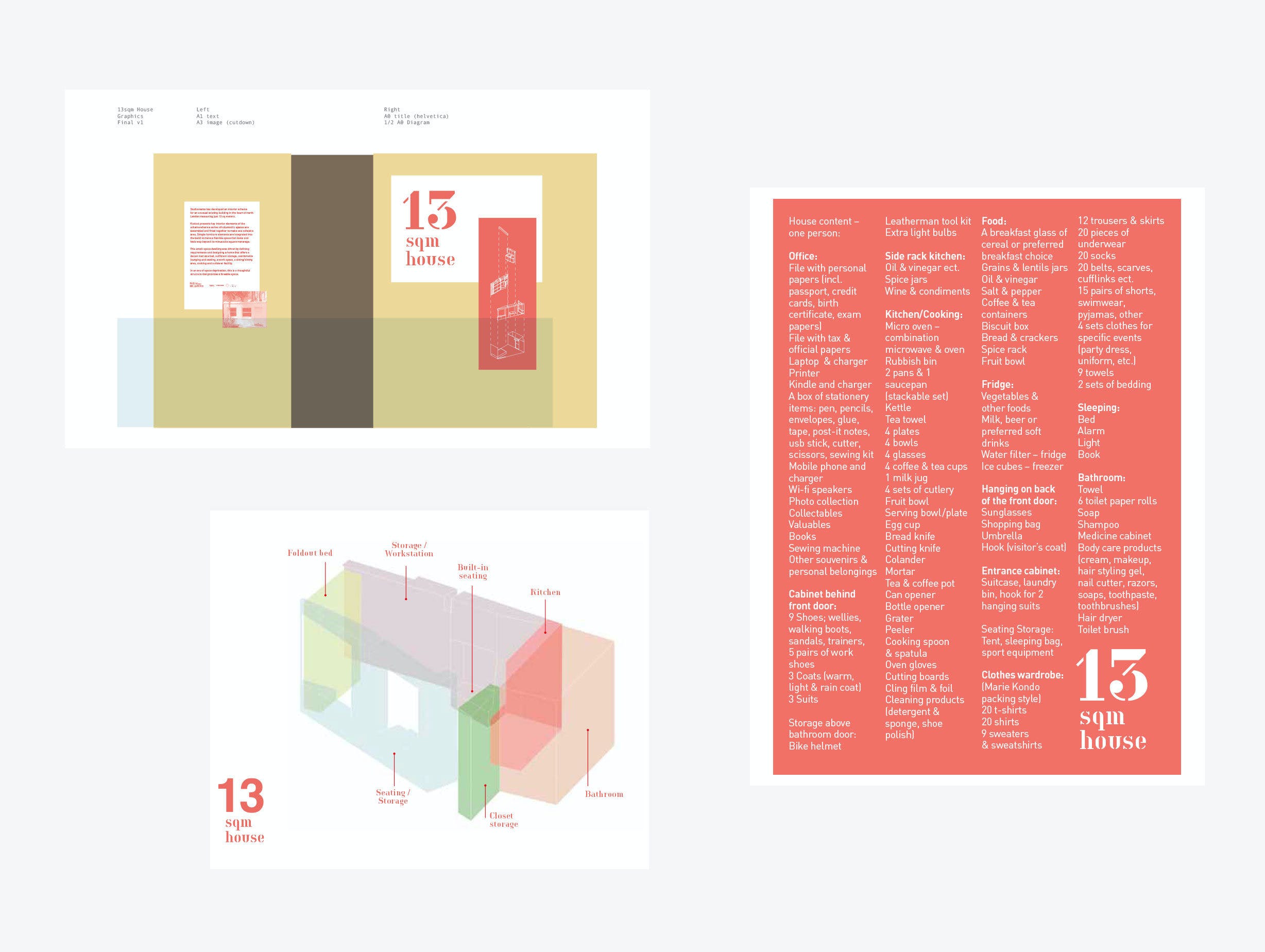 Plans for the installation of the 13 square metre house here at Viaduct, including a list of all the items they would include for 1 person to live in it.

At 13 sq metres designers, Nina Tolstrup & Jack Mama of Studiomama have developed an interior scheme into an unusual existing building in the heart of north London that measures just 13 sq metres. The house is presented at Viaduct as part of London Design Festival 2016.

Urbanisation is predicted by the UN to grow at an ever increasing rate from 54% today to 66% by 2050. We already see the effect of this trend in inner city living, the housing market, the lack of space not just in London but globally. As space becomes more and more of a premium, we have to rethink how we live and how we organise our living space.

There is a new generation seeking out different ways of living, whether it is a micro-living, house boat living, a co-living lifestyle or the flexibility of a job-gigging lifestyle with a flexible airbnb-type housing arrangement -  all alternative ways to facilitate a roof over one’s head. It goes beyond flat sharing into the realms of a new social dynamic where being nomadic is also a factor in your live-work existence. 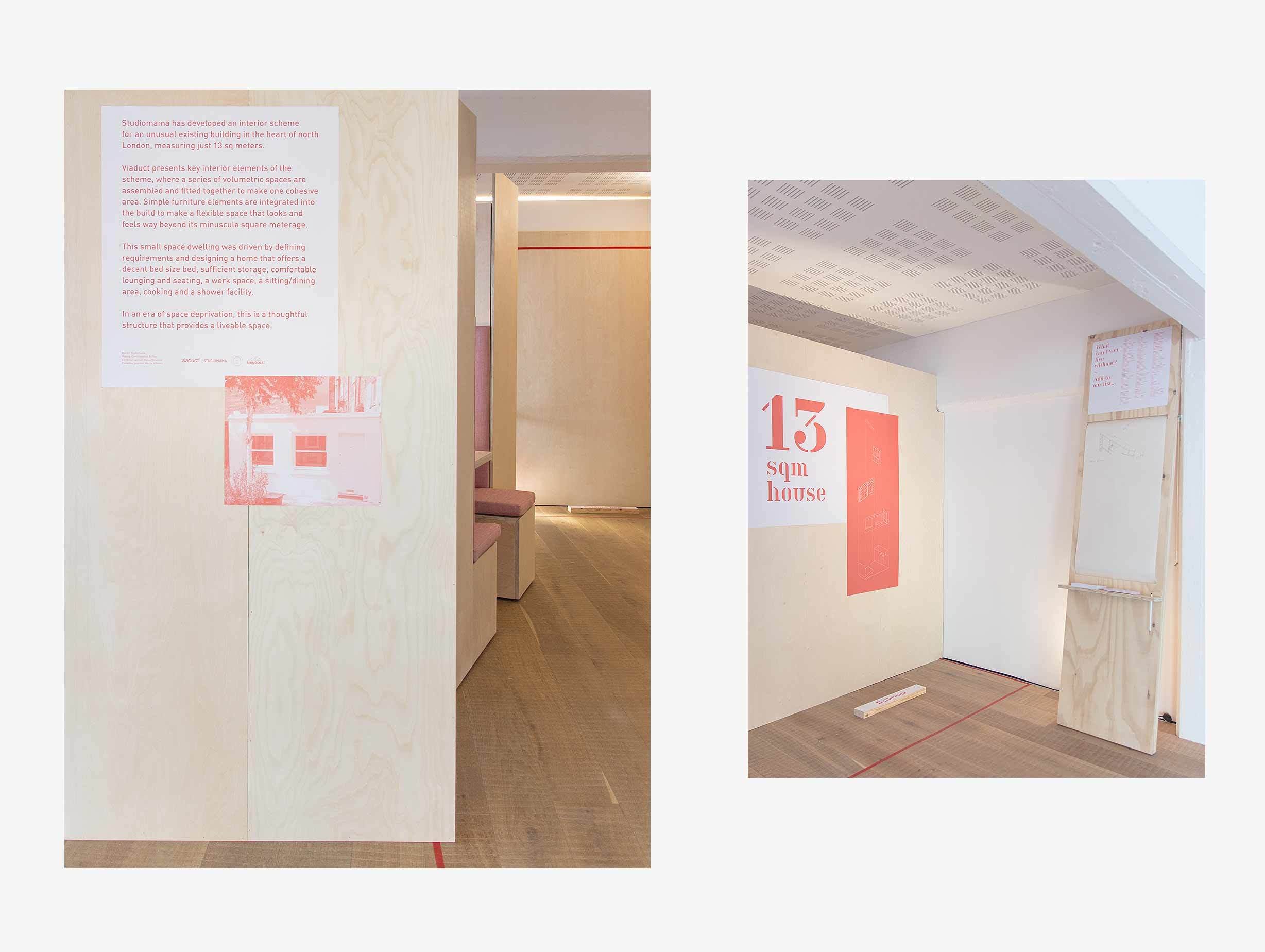 This is a carefully considered scheme, where simple furniture elements are integrated to make flexible space that looks and feels way beyond its minuscule square meterage. A series of volumetric spaces, assembled and fitted together make a cohesive area.

This small space dwelling was driven by defining requirements and designing a home that offers a decent bed size, sufficient storage, comfortable lounging seating, a work space, a sitting/dining area, cooking and shower facility. In an era of space deprivation, this is a thoughtful structure that provides a liveable space. It asks the question; What can't you live without?

James Mair, founder of Viaduct, explains his fascination with the project “Anyone who lives in London knows the challenges facing a new generation of city dwellers. Nina’s project appealed to me for a number of reasons, one because of its interior challenge, to make quality design accessible to all, and two because it should fire up a debate on housing in this city. There’s been much talk about co-living which is certainly one possibility, but here is one elegant solution for a tiny central London building. We don’t want to lose a generation because they can’t afford to live and work here.” 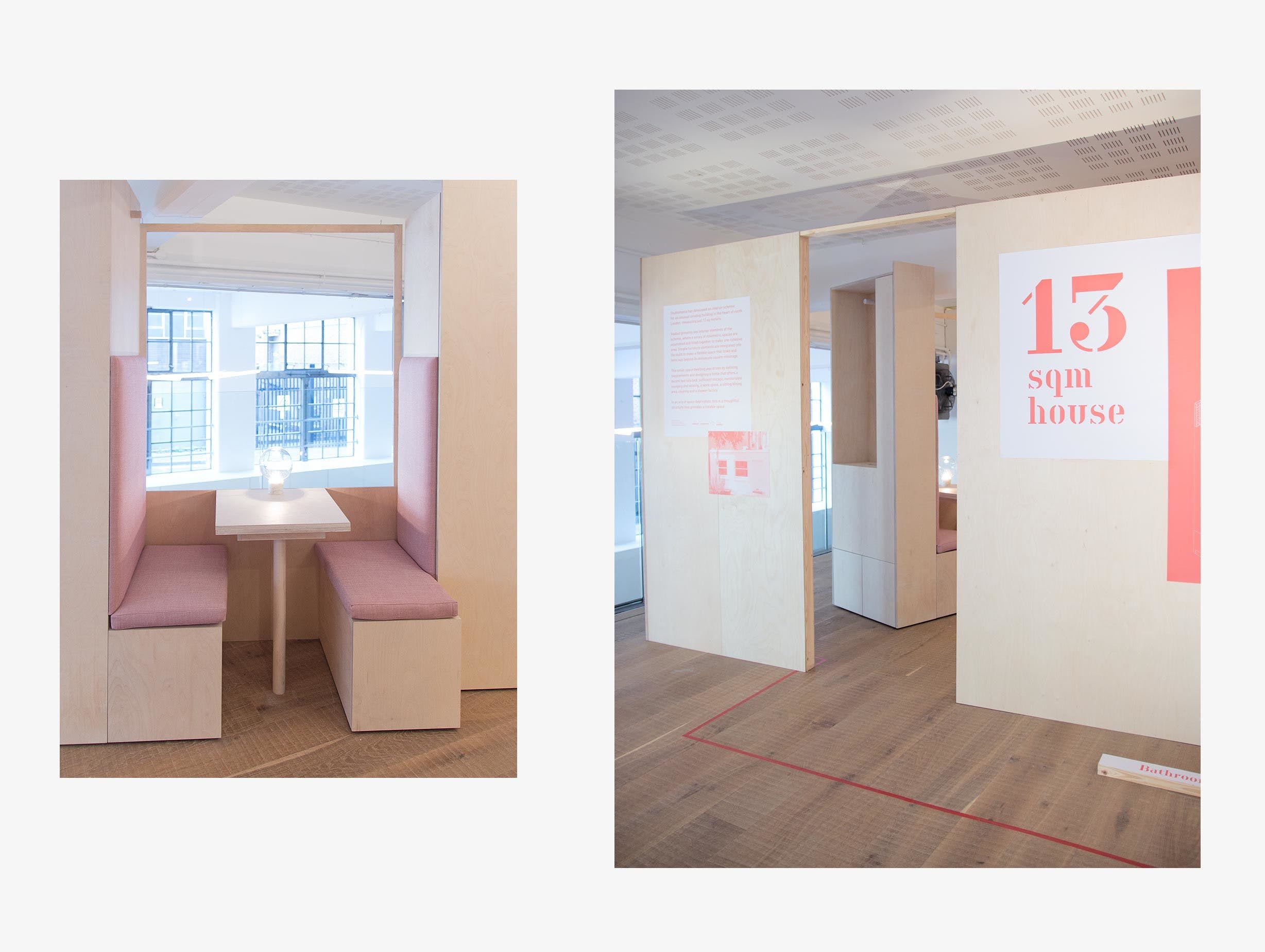 The house makes use of all available space, this table extends when needed and the banquettes double as storage bays.

The 13 Square Metre House by Studiomama - The Film Filmed and Edited by Suzie Joyce

Transcript of the interview below:

I have for a while been quite interested in this micro living which is a whole…google micro living and there are a lot of projects floating around out there but as a designer there is something really challenging about how do you live in a tiny space and still make it liveable and still be comfortable?

And then I came across this tiny little house coming up for sale on auction, you know? And it is kind of in our neighbourhood or not too far for us anyway, so it was like oh that is a really nice project to work with. So we managed to acquire this tiny 13 square metres house and we ..

Jack Mama: And we took it upon ourselves as a challenge to think well what can we do to make a really interesting comfortable living space. So in a way the project is also in a way posing a question about what is it that we really need to live? And to question that in some way.

Nina Tolstrup: So we made a list of everything that we think is essential or else we came up also with what can’t you live without? You know because obviously when you have that amount of space obviously at some point you can’t have everything.

Quite early on from when we had acquired this little house I ran into James from Viaduct and mentioned it because obviously it was a project we were quite excited to get along with. And some weeks later James mailed me and said, “You know Nina we were thinking, maybe we could show your little house and do something in the show during London Design Festival.”

James told us that he was working with a theme around minimal which kind of worked quite well with our kind of minimal living. Ours is obviously having a different kind of sense of minimal but in that way it worked really nicely.

Jack Mama: This is almost the size of a, well it is the size of a boat or a caravan and so that for us was a natural place to look in terms of inspiration, in terms of how you can pack all the different functions into a very small space. But we have managed I think to fit in quite a lot of different activities.

So the design in a way dictated itself in that respect you know? Our idea was to try to have everything, like a lot of things we do was trying to think about a dominant material and in this case it was working with ply. So we wanted it to be kind of like feeling almost like a cabin inside when you are in this more slightly urban setting. I think people who have come along have been very triggered by just how much you can get in a very small space! (Laughs).

Nina Tolstrup: Yes, so I mean we were quite surprised that there was incredibly interest in the little house. Of course it is intriguing, I guess when you read about 13 square metres that is a kind of joke so people have this double reaction of first, “That is really small,” and then, “Oh maybe I could live like this.” It is actually quite intriguing. And then all of a sudden that idea of like, “Gosh, actually there is not so much to clean.”

We talk to Muller Van Severen about their love of humble materials, acts of... Read more